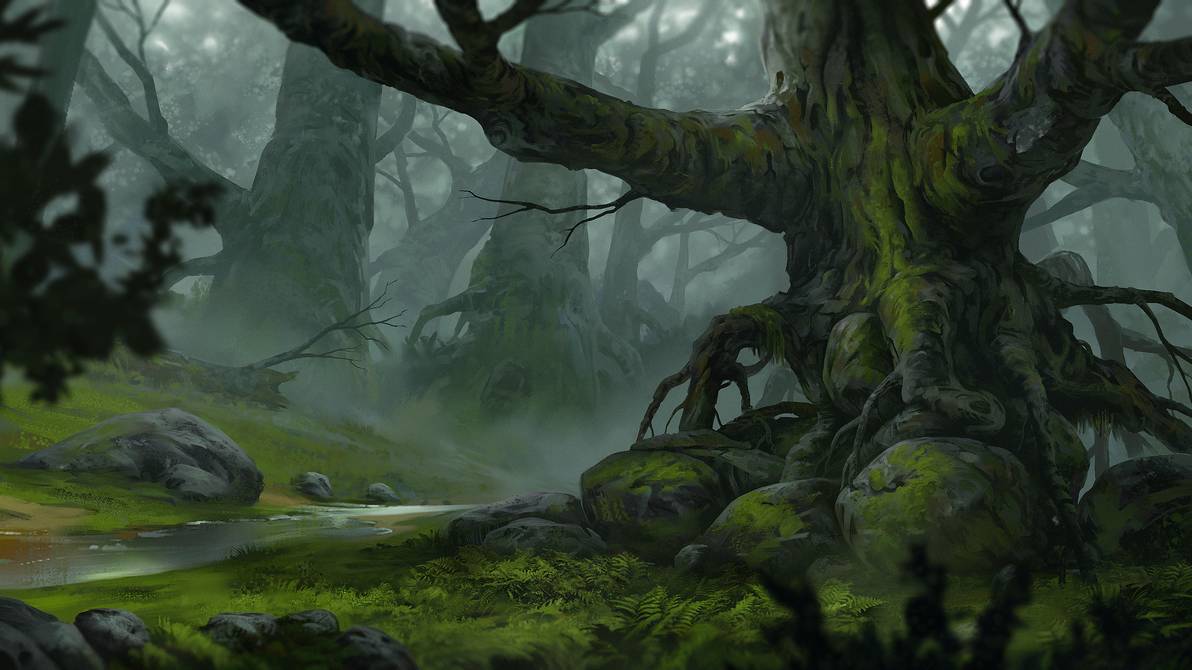 Deep in the thick of the forest, The captain of the guard found himself surrounded by Goblin bandits, only with his sword and shield to fend off the surrounding foes. “Damn Gremlins! All are but a pest! I do Davenport a service slaying vermin like you!” A swing of his sword would see one dead and another take his place from the woodwork. “RUE! HOW YA HOLDIN’ UP?!” He’d quickly look over his shoulder to see the little witch caught in a snare trap, holding her several feet above the ground by her foot. The Witch hated heights and REALLY hated being upside down. “Hardy Har Har, Old man! Lemme guess, your next one is “How’s it hanging, Rue?!”

The Captain smirks and continues his growing battle, dodging spears, and blocking stones with the large shield in his off-hand. He’d kick forwards, pushing the horde back, for some more swinging room of course. A large club would meet with the captain’s back. Morgan would cover her eyes with both hands as she slowly swung around in the gentle breeze. “Captain! Are you hurt?!” Responding to the Goblin with the club, was the might and bite of his blade. Removing the Goblin’s head in one thorough swinging motion. The old guard was well balanced in his attacks and his defenses. “RUE! AID ME! CAST ME A SPELL OF IRON FLESH! I NEED YOUR MAGICS, RUE!”

Morgan’s eyes widened a moment. “Eh…? I’m not one to fortify defenses in combat! I am no Combat support mage! I’m a healer! I can make sure you won’t… I don’t know… DIE!!” The guard was quick to use his shield to push through the horde, making more room for his sword and to breathe. “RUE, I CAN MAKE SURE I DO NOT DIE! WHAT I NEED IS SUPPORT!” Rue watched him handle those goblins well but knew not of what he needed.. especially from her. She thought a moment, one hand holding her large hat to her head. She closed her eyes a moment, squeezing them shut. What could she help with?! She thought… maybe to make him FEEL like he was buffed would be enough to assist him. She kept her eyes closed and smiled. “HOWS ABOUT A SONG, M’LORD?! A SONG OF FORTIFY… STRENGTH..!?” She was a terrible liar. She knew of no such song… And the Captain knew that.

“RUE! NO!” He battled hard, swinging his shield in a side motion, bashing all those before him… again pushing back the horde… though it seemed that he was now at the last of them, for no new Goblins showed up. Morgan swung back and forth from the rope that she was snared from. She took a deep breath and cleared her throat. “FOR THE GRACE, FOR THE MIGHT OF OUR LORD!! FOR THE HOME OF THE HOLY!!” She hummed the tune in her head. “FOR THE FAITH, FOR THE WAY OF SWORD!! GAVE THEIR LIVES SOOO BOLDLY!!” She would have continued singing, but alas, she forgot the lyrics. So she adlibbed some… “FOR THE GRACE, FOR THE MIGHT OF OUR LORD!! IN THE NAME OF HIS GLORY!! IN THE-“

“RUE! SHUT IT! OR I’LL LEAVE YOU FOR THE GULLS TO PICK AT!!” She gasps and slowly opens her eyes… seeing the horde now down to a few runts with guts… but the captain would make quick work of them. Cutting down two and slamming his shield down on the nape of the neck of the other. The captain of the guard removed his helm and sat upon a log. Needing a moment to catch his breath and wipe his face and mail of goblin blood. He would finally look up at Morgan as she swings about in the treetops by the grip of the trap. “Aye, miss Rue. This isn’t what I meant when I said I’d see you hang one day…” He cracks a grin, though Morgan didn’t find it exactly funny. “However, this is quite satisfying enough. I think I’ll settle on this for now…” He looks around realizing they’re deep in the forest. “Morgan, you know it’s dangerous out… If I wasn’t out here to take a leak, you’d be picked apart by those creepy green fellas and their merry band!” He cackled a moment, still catching his breath, and dripping sweat. “Yes, Yes… I know, Old man… And you have my thanks. Now I beg of thee, cut me down!”

The captain would laugh. “Aye, I’m getting there… I don’t get paid enough for this, Miss Rue. Not by the King’s coin and sure enough not yours either. I expect a nice warm pot of your blackberry tea, and a new sweet every day for my breakfast.” She sighs. “Fine. It’s a deal then… Tea and sweeties. Who knew you were so easy to please, Old Man?” She grins and suddenly… the rope snaps, followed by a loud thud. The guard would lean off the log some to get a look at Morgan. “Aye, you’re a healing witch… You can lick your own wounds, cant’cha?”

Views: 48
E-mail me when people leave their comments –
Follow