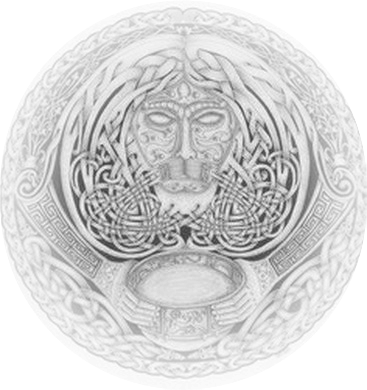 Alas, the story is told of the Celtic God;

The story goes that many years ago;

There was a widow who lived in a small colony in Ireland. She was known to live on the shores of the Sea, awaiting her sailor to come back to her. Though, sadly, his ship was lost to the waves of a stormy night, never to be seen. She mourned for her loss of love and ached for a family. The widow was known to be beautiful and was greeted by many more suited sailors.

But she turned them away. Not wanting a new love. She urned for her husband, though knew of his status. She would live with the fact she’d grow old alone and without kin. Her beauty to be dead to the world.

Little did the widow know Ireland was about to be invaded. The British were taking over, and she’d be without a home. Then, one stormy night, she was awakened by a man at her door. He was large, had thick, red, braided hair. He looked like a wounded soldier. She took him in, aided him, and fed him. He called himself Dagda. Which she knew of the Celtic Mythology, was he really the God of Earth and Protector of All?

Indeed he was. And he was captivated by her generous heart and beauty. He too ached for love and family. Though his mission was to help in the battle with the British, he pursued her. The widow, longing for love, gave in, hoping this would heal her wounds and maybe live to have a family.

But alas, he had work to do, and left the widow, only to tell her he would find her again after the war was done.

She was heartbroken a second time, alone in her little cottage by the sea, little did she know, she was carrying a baby girl.

Weeks went by and she heard no sign of the man, until the day she was taken captive and was sent on a British cargo ship to the Americas. Separated for the last time with love, she knew she’d never see again.

Until she had Her.

The widow hadn’t known love until she had wrapped that little girl in her arms. It was a new kind of love, a wholesome love. A love that could never be broken.