Ye who stand before the Gates of Hell take heed for the time of Judgement has come to the.  You are bound by the sins you've commited, the bonds you made by your actions and your heart. On your way, being ferried by the Ferryman on his Ferry boat you will notice in bluish sea; serpants of flames followed, One serpant managed to climb the boat devouring one of those that traveled with you, pulling them into the sea. Before you now was a sanctum, one now part of land with liva flowing down from its sides.  A skull propted on the front  and a  hellish glow would be coming from the gateway. 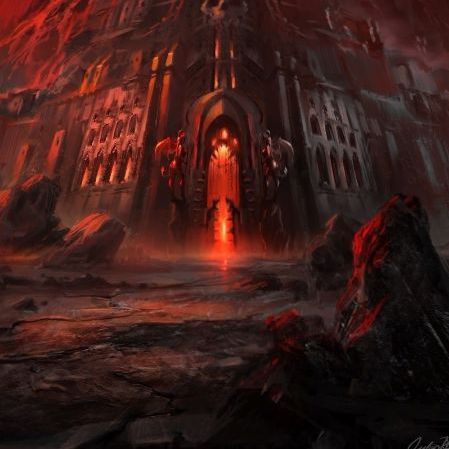 Once the Ferry had ended its journey, you were dragged by the chains by your jailer; A beast with the head of a ram, its eyes hellish red and wings on its back. One tried to escape its bonds only to be lifted up and over the beings shoulder.  He put pressure around the person that tried to flee when struggled.   One they reached the gates they would open revealing torches from above, next to them were thrones that had  statues with symbols engraved above  them; A hammer, a scale,  and  woman wearing a blindfold.  It seemed deserted, but there was this...unsettling feeling that made every prisoner fear of going in.

A voice can be heard echoing around them, a cold wind  came causing the breath of the prisoners to be seen. The beast would throw the one who tried to flee inside to the center of the room, The flames on the torches grew brightening the room three figures can be seen on  on the thrones that towered the room.  Soon a growl can be heard from the throne to the left where a  wolf like beast with a skeletal body would sit, its eyes staring at the prisoner only to tilt its head.

The being said and soon  a shadow would come from the ground where a nun would take its place and suddenly grabs the man by the neck. It would then start to drag him to Hell.  The demon was more animalistic and seem to despise mortals. You have heard the tales of the realm of Limbo, and the Judges of Hell; those that decide on where the souls of the damned shall go.  The demon you witnessed could be none other then Barbatos; A demon who was well renowned for Hunting the souls that would try to flee Hell's grasp and speak false words and faud. On his side was a rifle that had ancient runes engraved on it. He was an intimadating force to stand before as he sat on the scale throne. 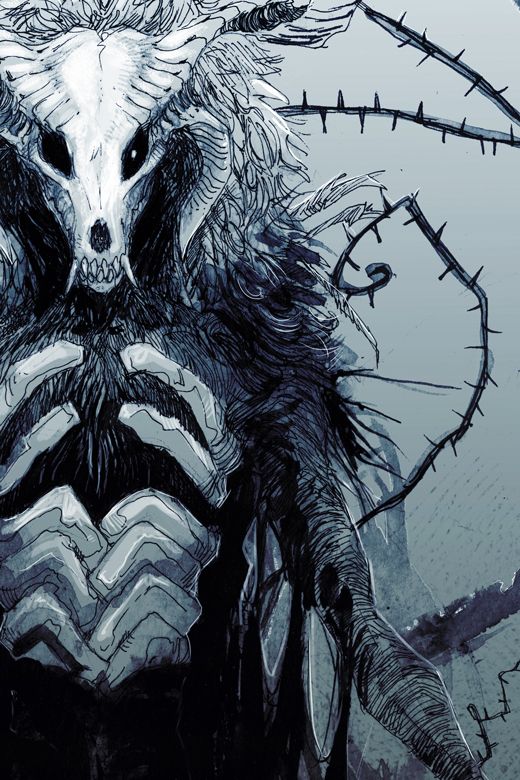 The voice beckoned once more, this time a man who looked to be a well fit muscular adonis would step forward. He looked around like a wild animal trying to find its prey, but he was soon met with a tail slamming him into the center of the room. The torches brighten the room once more as a dark laughter can be heard on the throne in the right.  A larger and more horrifying beast that can be the living statement of hell, wrapped around the throne like a snake, its size was a wonder but its eyes stared at the alpha male with pure evil in its eyes.

It shouted as  a centaur came from the ground grabbing the alpha male by his foot only to drag him down into his own Hell. This dreadful beast, one that could be none other then Aroan. A demon well known for its treatment to mortals that  enter Limbo.  He toys with souls that have darkness in them mostly those that go by violance or anger. As he may hold judgement, it is rare for him to give it; other times he would just devour the soul that was going to be judged. The tail hit the alpha male from before was connected t Aroan; that is how large he was, to have its tail on the 20 ft from the floor to the throne. 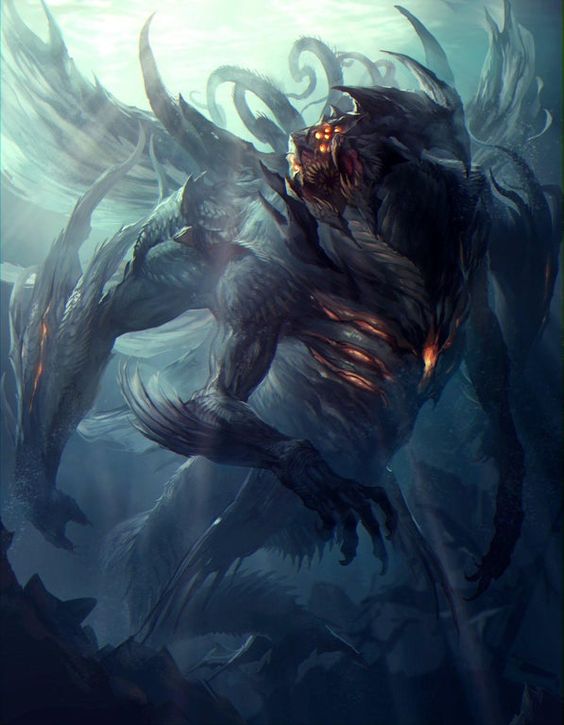 Once again, the voice came beckoning the next one to be judged, a woman would be next to step forward. But as she reached the center another woman would step forward pushing and shoving people to the side till she reached the other and embraced her. They would start to cry knowing that they will suffer for all eternity. A giggle can be heard as  the torches burned brighter as one would be standing before them . Its smoking black hands would move toward them pressing against their chins as if examining them.

Smoke came from its head close to its horns, Its face was rather feminine, it had no eyes but no one would doubt that it was staring at them.  Soon it would levitate  toward the middle throne only to sit down. It would then tilt its head for a moment before giggling softly as it would then wave its hand.  It was clear that it was ready to cast judgement on both.

Soon enough the ground began to shake as a 12 ft tall creature with a mass of fat that would shake with every step it took with a gaping mouth that drooled. It would grabbed the woman that first enter lifting her up. The other would cling on long as she could but it was all in vein when the gapong mouth of the creature bites down devouring its target only to leave the girl that clinged on to her and a hand that was left behind. The lover would lay on the ground with tears in her eyes, she lifts herself up till she was standing only to feel a hand running through her hair, when she turned to look at who was touching her she realized that it was a beautiful naked woman with the darkest skin.  All she could do is gasp as the woman would kiss her taking her breath away as fire engulfed them and they disappeared.

This judge, without a doubut was Camiel, one of the most twisted of the judges. He enjoys teasing the lost souls, making them suffer by forcing them to endure all the temptations of Hell. To always destroy the souls...until there is nothing left. 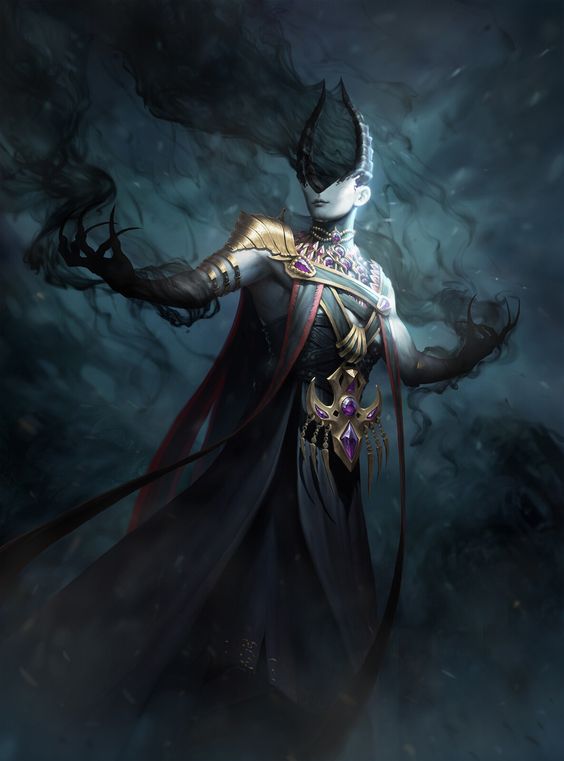 Now it was your turn, you stepped forward with your own will.  Everything was silent as the torches would light once more only to have all three Judges gaze upon you. They would then look at you, judging you, bickering all about you and your past. But it was a stand still for they could not agree with one another. For such a rare occassion they soon become silent.

"The judges could not decide, therefore I shall decide."

The voice that had been heard for the very first time spoke, soon the shadows from the ceiling would fade revealing one more throne, larger and more extragant with golden statutes beside it carved as the judges of Hell and a large skull behind him. Sitting on this throne was one that looked rather beautiful and Angelic, he was masculine and had wings; he was like an Angel but there was so much  to him,  He held a scale in hand and hammer on the other, his eyes were closed.  There was with a doubt who he was; Mephistopheles. Soon Mephistopheles would rise up only to spread his wides gliding down to you. His hand would extend to you only to take it while smiling for a brief moment. "You will be a perfect demon to join us." He would say before guiding you to the Circle of Greed.

"Our judgement is firm, our will is strong, and we shall always bring the souls of the damned to their proper Hell....None shall overwrite our claim."