The wet floors of one of the lower levels of Coruscant caused a Rodian smuggler to rush through amassing puddles that gathered upon the walkways and arose from the gutters that were cluttered and clogged with trash and wastes. The smuggler nearly slips on the slick floor and decided to break his fall by pushing through a crowd of ruffians and even a twi’lek sex worker. He’d slip around a corner and rest a moment in a dark alley, trying to catch his breath and lower his heart rate some. He’d be quick to look at his data pad and run over the numbers of the location he was to meet his contact. A sudden shift in his attitude would change when he let out a sigh. The neon lights of many shades of pink and vibrant blue hues would illuminate the wet and misty streets of the rodian’s surroundings. If he wasn’t in such a rush to get this deal over with he’d probably take a trip to one of the many night clubs, jonesing for a dance and a death stick or two. He slowly stood up from his slightly hunched over position and rose to his feet. His massive eyes would scan the area before rushing down the street again, holding on tight to the rather hunky canister he clutched to his breast. He had no time to read the bright signs of advertisements and flashy billboards that were strobing in colors and scrawled in Aurebesh. The smells of gutter filth and waste gave away the position of the low income housing area he was in. Gang related graffiti and vandalized buildings span across the area along with the riff-raff in the streets. He was getting close, but the prize in his clutches was about to change his life forever.

He would soon see the massive club that shined bright with neon lights, and flicked in animated signage, oh yes. He was close. Rushing past pedestrians, the overly excited Rodian came to a crashing halt when he clipped a parked speeder bike that was right outside the club’s stairway. The smuggler would yelp as he tumbled to the ground. The clunky canister would fly across the floor and skip across the ground. The Rodian would grumble and moan in pain before slowly getting to a knee, he’d spot the canister, but now all eyes were on him… especially the gang members who’s swoop bike he just crashed into. The smuggler was quick to shriek as he saw the gang members rushing towards him. “Kaa! Hee kouzago-ake!!” He pleaded, but to no avail. The gangster draws a blaster from his coat as his buddies cackle and laugh menacingly. The rodian skimmpers to his feet and nearly falls as he clumsily raced towards his prize in the middle of the street. Onlookers would cheer and cast aspersions at the fool as some even chanted to the swoop gangsters to kill the guy. A few blaster bolts would fly by like a bucket head was firing the damned thing, missing the rodian as he sweeps up his prize and races into the packed club, leaving the gangsters to chase after him, no one touches another man’s swoop bike and lives to tell about it. “Bantha poodoo!!” The gangster casts out as he smacks his blaster, the damn thing seemed to be a calibration problem on his end.

Inside, the rodian smuggler would push past the crowds of dancing party go-ers. Spilling a drink here, staggering a dancing group there, and even slipping past a blue Ortolan jammin ‘out on a red ball jett organ. A female chiss dressed in a black hostess uniform would speak into a voice communicator. “Tah cart cseah s.. ch’itksoo. Rab cseah s…” Unpleased, but slightly impressed, the woman gave the order and the smuggler was cleared to enter the back room as he was instructed on his ship. He’d not known how smooth that went for him and he plowed through the now opened door before him. It quickly shut behind him with an air driven hydraulic hiss. He nearly collapsed before a small group of men sitting at a table, seemingly waiting for the smuggler’s arrival. 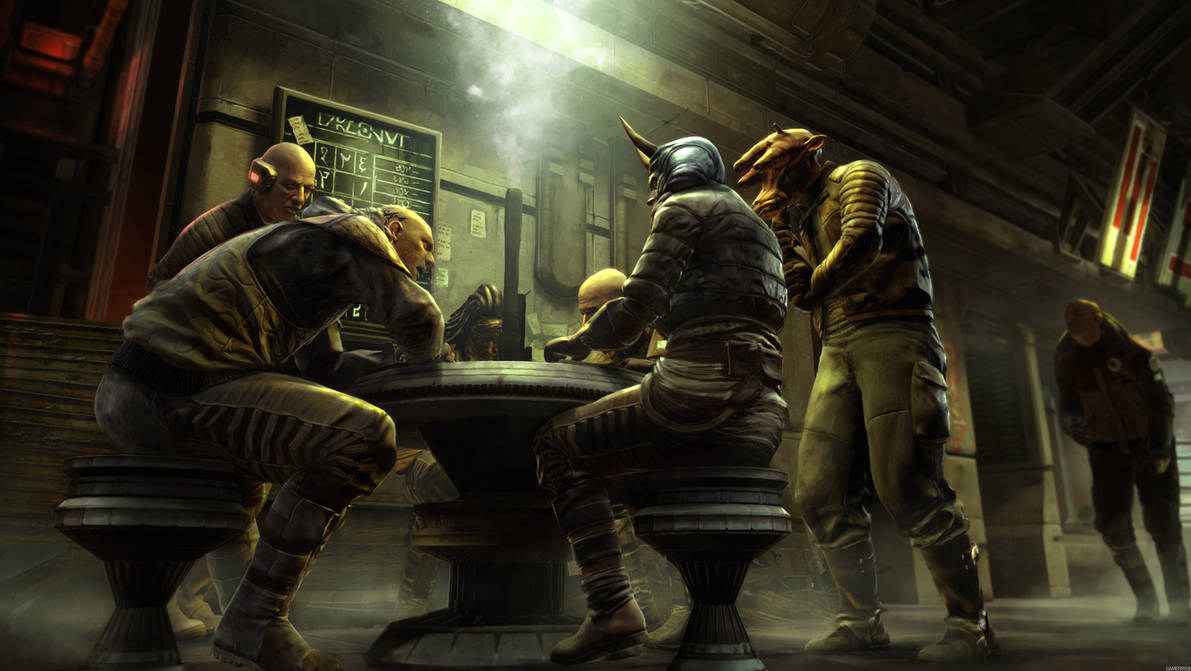 “You’re late… Not by much, but late is late, Sneens.” A man called out as he slowly rose from his chair. “What the hell happened to you, eh? You look like you just saw a krayt dragon.” The Rodian nearly collapses as he tries to catch his fleeting breath. A wheezing noise was made while he tried to spit out words to the man. “Alay, tagwa. Um tee koumuan kon… Uba neu?” He flashed the canister before setting it down before him. Resting on one knee the Rodian quickly punched in a sequence of buttons, which caused the red light on the canister to turn green in acceptance. Quickly the smuggler turned a latch on the contraction and with a puff of mist, the prize was revealed to the man that stood before him. With a few slowly taken steps, the man approaches the canister to see his prize, like taking steps of his well earned self proclaimed destiny. “Ah, so it is, Rodian… Do you know what you got there?” The was finally at the canister, the prize awaited at his feet. He goes to reach down for it, but suddenly stops as he feels something out of the ordinary… a shift in the wind? No… something more… Something bigger. Suddenly the lights begin to flicker and the ground trembles beneath their feet. The three gangsters at the table look up at the ceiling in confusion, noticing the flickering lights and dust trickling from above them. Suddenly, a large metal strut flies through the air from the dark hallway that leads to a shrouded alley outside. The strut would strike one of the men at the table, crushing another as he yells out in pain for only a fleeting moment. The third merc at the table draws his blaster and fires a bolt into the darkness that was the open door to the alley.

The blaster bolt was sent right back, burning a hole into the nikto’s heads through his left eye. The leader who stood before the prized canister quickly turns and draws his blaster and aims it at the darkened doorway. The blaster would be yanked from him, sliding across the floor with a clatter as it hits the ground. The leader yelps as he is lifted into the air, unable to move a muscle. A dark cloaked figure then emerges from the shrouded doorway. At this time, the rodian smuggler cowers in fear, staying on his knees with his head to the ground and his hands up to the skies in a surrendering gesture. “ Chuba…” He’d cry out in fear, as his trembles in his boots.

The loud footsteps draw closer to the levitating man and the shivering smuggler. They would stop when the cloaked figure stood between the two of them and the canister. The prize would gently float out from the canister, and make its way through the air and stop right before the shrouded figures face. It would rotate as if it was to be inspected by the cloaked one. The cloaked one’s head would cock to the smuggler. “Do you know what you have here?” The cloaked one would finally speak, in a cold sinister woman’s voice. She would chuckle under her breath wickedly before looking back to the man she had suspended in the air. “What say you, hmmm..?” She brought the prize to his face.. A pyramid shaped trinket, made of red glass and detailed in gilded decorative struts and angled beams. “What you see before you is thousands of years old… a key to great knowledge, power and worth more than the few scraps of credits any of you fools could muster together.” She would spin the prized possession, tauntingly in the suspended man’s face. “At least you died knowing exactly what a holocron is, aye?” She’d cackle as her hands would rise from the cloak, her wicked black nailed finger tips sticking out from the cloak and firing a barrage of red arced force lightning. The man would scream in pain and perpetual torment for what seemed like forever to the smuggler who nearly pissed himself as he witness the man obliterated to smoldering ash that fell to the floor in large clumps… his contact, the man who he was supposed to meet was now a pile of ash charred flesh on the ground… heaps of smoke filled the air and clouded the sight for the smuggler.

“Kolka…. KOLKA!!” He cried out as he knew his turn was drawn. The lights would flicker again as the cloaked woman would turn to see the smuggler before her feet. “You have brought me a great gift, smuggler. I shall return the favor by sparing your life and having you swear your undying loyalty to me… for you owe me a life debt. Fair enough, is it not? I require your services… you will bring me tribute. Sith artifacts, sabers of the lost, pinched cargo.. Whatever it is you can get your hands on. I’m not a picky woman… except for when I am…” She would cackle aloud, echoing through the doorway and bouncing off the walls.

The smuggler seemed to have no objections. Nodding his head in desperation as if he’d just got the best deal on a X-34 landspeeder. “Tagwa! Tagwa! Hiee, mah Lorda!” He would notice the bulbs from the lights fade to pitch black… followed by a cold gust of wind, a loud and furious sounding blast of pent up rage and wrath. Quickly, the room was illuminated once more by a crimson glow from an ignited and aggressive looking lightsaber. Looking up at his new fond master, the rodian’s eyes reflected the crimson glow like moonlight on still water.  The red light would reveal the woman’s face from under her hood.. She was that of a Sith Lord “Now go, before I change my mind, Sleemo.” The Rodian was quick to get up and race out of the door and into the dark alleyway, not knowing where it leads to.. Just away from there. The woman would wait till the smuggler had left the scene and stood alone amongst the mess she’d made. Her red and yellowish hues would eye the prize once more as it let off a faint red glow. She was quick to grab it from the air and pocket the holocron in her black wisp like cloak. In a snapping motion, she would deactivate her lightsaber. The room was pitch black once again… until the lights flickered back on. The Sith was gone and the remnants of a horrible scene was the only thing that was left standing next to a pile of smoldering ash of what used to be a Coruscant underground crime lord. The door from the club would open and in walked the chiss woman. She’d look around a moment before sighing, shaking her head and calling for a janitorial droid.

Views: 32
E-mail me when people leave their comments –
Follow