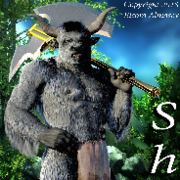 Extremely friendly, kind hearted and gentle despite his size and bullman lifestyle.

Sweet stuff, especially sweet stuff that gets him drunk. Friendly people who aren't trying to fight him because he's a giant bullman.

Fighting for no reason, people who harm nature for no reason. Heights. He's not scared of heights, as he's from the mountain clan of his particular breed but he also doesn't find the thought of a thing his size falling from a great height and hitting the ground to be a pleasant thought.

Straight from the forests of Hellifyno comes the beefiest Minotaur in existence, SHIA! He carries a big axe but rarely ever actually uses it for it’s intended purposes because he’s considered a gentle giant. Thus the reason why he’s out on his own rather that in the company of his clan. He’s a little hot headed but for the most part he’s relatively nice and would prefer to tell jokes, have a few drinks, and make merry with the populace. He’s fiercely loyal and while not prone to violence he will defend those that he calls his friends without any question, but for the most part he’d prefer not to fight which makes it seem rather pointless considering just how bulky he is. It’s rather difficult for him to fit through most doors, so it’s very likely that he’ll simply chop his way through a wall or something of that nature. How else is he supposed to get inside where all of the people are? This doesn’t really help his image though, most people are ready for a scrap when something chops through a wall just to get inside.. The world simply wasn’t made large enough to fit such personality! He was exiled from his clan because he refused to take part in raiding parties, and while he can fight he refused to hurt people for the sake of simply gaining income and that was considered bad for the sake of his particular clan’s economy. He’s been on his own for many years as a result. 24 years of age, he was born from a human mother and so his clan accepted him until both of his parents died. His axe is a family possession that was given to him when his father died during a raiding party, it’s the only thing the clan allowed him to take when he left. He lived in a cabin sizable to him in the forest of Hellifyno, living among the forest sprites who accept him because he does not wish to hurt people for no reason. His only family is his axe, and so he chooses to only use it sparingly.. It’s all he has left. He wants to make friends but he carries the axe with him because he does respect the customs of his own kind. With the help of a good friend he found a way to move offworld to avoid all of the pointless wars and people with sour attitudes without having to get into any form of flying machine. Woohoo for teleportation! He’d be considered awkward to be seen without the axe, yet he wishes not to fight simply for the sake of personal glory. He might be large, but he wants friends more than he wants enemies.

Loin cloth, a pouch of gold, and a large ax.

He's super strong, then again that should be obvious considering his size and mass.. Strong enough so that a hard swing with his ax can cleave the ground without the blade actually touching it. A skilled hunter, gardener, and cook. He's more likely to invite you over for a good meal than he is to fight you.