Bartholomew Hunter grew up in Fairfield, Philadelphia up until the first infection. The day had been like any other, a long day of slacking off in class and hanging out with friends. What more could a high schooler ask for than that? Later that night, alone at home, Barth and all his friends recieved a text from Peter which shared a link to a video recently taken outside of Mercy Hospital.

It shows squads of police cars racing towards the tall building, weaving around cars until blocking off all the roads as offers swarmed the building. It was only moments later that you could hear the roar of gunfire sound over the wailing sirens and screams of panicked patients, dozens of bloodied people fleeing from the waiting rooms and halls and flooding out into the streets.

An ambulace sat at the front entrance, blocking the way of many who tried to escape. The white sides of the responding vehicle sprayed with blood and riddled with holes, the video cutting short as the cameraman flees.

It was.. horrific. What the hell was happening? Fairfield was always so peacful, and those were innocent people they fired into! The text box flooded with panicked messages from his friends, save for Frankie, taking this chance to belittle him as usual. Thankfully, Samantha and Dolan came to his rescue and silenced him real quick. This moment was about what was in the video. It wasn't long till Peter and Dolan were both telling everyone to switch on their TVs.

On TV, every channel was taken up by a buzzing alert. The screen showing clips of videos that were flooding the news before the buzzing switches to audio and the video switches over to a news woman standing outside a supermarket, people were running in and out with carts filled with supplies as she backed up talking quickly. Just like the last video, things went to hell real fast as the screech of tires drew the womans attention before a van collides with her and she gets rolled under the tires. The camera drops to the ground and the lens cracks, the screen gping black as the last thing you hear is gurgled cries and panicked screams before there is silence. The video is on the news casters, their terrified expressions looking on as they struggle to recover from what they just witnessed.

Then the screen just flicks back to cuts of videos and the buzzer wails again. Barth's throat was raw and it was only until the alert came back on that he realized he had been screaming, his tears staining his cheeks. Moments later the TV turned off and Bartholomew's head turned to the flicker of a lighter, startled by the appearance of Frankie.

"Jeez. I could hear you screaming like a girl from a block away." He said, lighting up the cigarette he held before taking a long drag and blowing it down in Barth's face. "You didn't answer your phone, Dolan told me to check on you."

Bartholomew had forgotten that they were neighbors, Frankie lived just a short walk away. Dolan? Well, Dolan lived right across the street, but one could say he didn't much care for stretching those doughy legs of his. Peter lived closer to the city and he was much older than the rest of them, sort of their informant in a way. Tyler and Samantha lived up on the other side of the city in a complex, closer to the hospital than anyone else.

"Come on. Lets get Dolan and head up to see Peter, Samantha and Tyler said they will meet us there. He might have a way to get us out of quarantine." Frankie said, taking in another drag before dropping the cig onto the carpet and snuffing it out with his heel. Waiting till Barth was near to blow that puff in his face too.

Quarantine? They were quarantined? Something that had been drowned out by his own screaming was that Fairfield was being closed off from the rest of the nation in an attempt to conceal whatever was going down within the city from reaching the rest of the world.

Heading towards Peter's, they did not reach their goal. What they came to was a blockade and quickly burning city. Crumbling through panic and a rapidly spreading infection.. 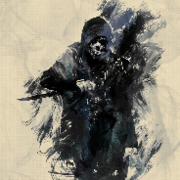 "Frankie!" Bartholomew called, stepping past the splintered remains of his friends door. The…
See More