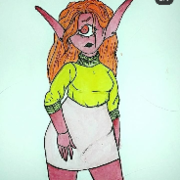 Initially, Bea presents as a busty, rounded-out Cyclops. As a shifter, she can appear as anything but can't help that this is their most comfortable form to take. Not only able to change form, Bea can change the colour of their skin tone and fine-lined details such as her freckles and eye colour. Never really sticking to one tone, or style for that matter. One large eye, placed delicately amongst a rounded face. Pointed ears that reach just barely to their shoulder, usually poking through locks of breast length hair. Remaining between the height of 5'0"-5-5", growing any larger in certain forms does damage to her frame.

Bold, with a sense of being humble. They're empathetic to others and can sense the intensity of their emotions, sometimes losing sense of her own. Beyond that, Bea is realistic but not afraid to try and be lively in the mix. There is a touch of danger, a mysterious numbness that can't be easily reached for.

One to enjoy the simplicity of rain in the forest, the scent of mint and lavender. When the small things can be remembered for no reason at all. Making things a little more bearable for when the world really needs it.

Her past is silent, spoken to very few that never remain for too long at certain points in Beas' life. Currently, she will float from where the wind shall take her.

Always armed with a knife that's hoisted to her thigh, sometimes hidden and sometimes not. A sizeable back tossed lazily over one arm or the other, carrying usual items; pens and markers, paper, a tennis ball, lighters and such.

Aforementioned, a shifter. Though her common form is that of a cyclops, Bea can present as most anything for extended periods of times. Managing to hold out human-like forms comfortably, merging into more cryptid like extensions. Animals, on the other hand, is nothing but a breeze in the tall summer grass. Though it's never really said, before choosing her current form, they had trained their frame to take on several forms of animals. Owls, bats, foxes and felines. Typically smaller creatures. She can grow to be more mythical, though it's a bit more rare if anything.

I've fallen out of practice with my enjoyment of reading and writing, and I'm looking to spark that flame once more.

Started by Beatrice Rylinee in Roleplay (In Character)

As a new member, I found that this was a decent way to start! I am open to either a short or long…
See More