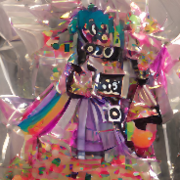 Charlie's a bit of a nervous wreck and a clutz. Ae's not a very well-organized person and can be a bit spontaneous. Ae's pretty creative and a generally sympathetic and patient person. Charlie may not be quick to trust someone, but is a loyal friend once someone proves they're trustworthy. Ae's introverted and a night-owl.

(Charlie's pronouns are ae/aerm/aers and ae is demiromantic acespec and questioning aers orientation. ) Charlie was taken away from unsuitable parents and put in the system until the age of 8 when ae was adopted out to a kindly lesbian couple. Ae has a younger sister named Marcy who looks up to Charlie. Oddly, ae was often blamed for things ae didn't do in school because ae "looked suspicious". Charlie still doesn't understand why or how. After graduating high school, Charlie moved out of state to get a degree in the arts and got a job working retail to pay for everything with some financial help from aers moms. Ae recently even got back in contact with a friend ae made while in the system named Wilda, and they've even been making plans to meet in person. As it would turn out, Wilda doesn't too far from where Charlie moved to. As of late, though, ae has developed this unshakable gut feeling that someone or something is watching aerm and maybe even in aers dorm with aerm, and yet nothing has been found in the way of evidence. More and more often, ae will see something out of the corner of aers eye, only for it to disappear a moment later or hear something just for nothing to be there. Sometimes, Charlie could swear ae saw a strange dark-haired person standing and staring at aerm from a distance or in the background of a reflection, and something just seems off about them, but ae can never get a closer look. Oddly, no one else seems to be able to see this strange entity. Maybe ae's going mad or maybe ae's just sleep-deprived. Or maybe it's something else.

Yo. You can call me Cyanni, Morn, Cya, and/or Mor. My pronouns are primarily vey/ven/vims. If you want further info on pronouns, go ahead and ask. I've been casually roleplaying for around 8~9 years and making OCs as long as I can remember. I have a very developed multiverse with lots of lore, and so all my OCs come from there. I'm not sure if I'm necessarily good at rping, but I do it anyway. I want to roleplay with adults, but I am strictly against anything sexual in my rps. I am okay with maybe just a bit of romance, but I definitely don't want it to be the main focus, and I really suck at it and don't even know what is romantic and what people actually do in romantic relationships. I like platonic, queerplatonic, and maybe even altuis relationships, special emphasis on queerplatonic. I'm not exactly sure what genre or any of that what I have plans to with this character is, but it's not completely realistic, completely fantasy, or completely horror. Maybe slice-of-life-y? Up to this point, I've only ever had the opportunity to do very casual roleplay. My ideas often come from dreams, and I adapted this character from a dream I had. Ae has some growth to do character-wise.

Looking for a long-term roleplay partner

Started by Charlie Garrows in Looking for Roleplay (Out Of Character)

" I am interested as well as intrigued that you are also a lolita. It should be noted that I am hot…"