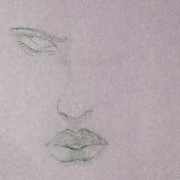 'normal appearance' Height: 5'7" Weight: 190lbs Body type: Lithe dancer's build Eyes: Crimson with flexes of silver Hair: Long silvery and kept in a tight French braid Complexion: like sweet caramel Hands: long fingered and nimble Scars: a diagonal slash through the right eyebrow that heads toward the temple. A burn mark on the upper left shoulder. Marks on both wrists, if not wearing something over them. Others that are usually covered. Tattoos: Not usually visible

Not one for making small talk. A bit abrasive, like a skiddish cat. Under that though is a loyal, sweet, but snarky individual. They put up the front of being cynical and apathetic but under that is a optimistic dreamer.

Animals. Food of all sorts. Trying new things in food and drink. Open spaces. Music, most art, singing (though around others it is more like humming to one's self). A good fight (once in a while). Learning new things.

Those who hurt children. Those that use their power against the weak. Anchovies on pizza. Too much noise. Overly crowded spaces. Being confined against their will. Drugs of any kind, even pain pills (for themself). 'Modern' or 'abstract' art (in most cases).

Tends to wear: Silver small eyebrow ring in left eyebrow Piercings down both ears Black tongue barbell A black velvet choker with a sliver rose and a small ruby that looks to be dripping from it. A circlet on their right bicep. Arm bands T-shirt (varies in color) with a long sleeve black button up shirt over it but left open Jeans (dark blue or black) Black boots that are well cared for but worn Carries: Small messenger bag Knife (where allowed) Art supplies (usually a sketch book, various pencils & pens, & tools to sharpen or erase) Music player and head phones Sunglasses Etc.

Interested in many different styles of writing. Tend to be patient with response times. Tries to balance characters. Constructive feedback is okay but there is a difference between that and opinions.