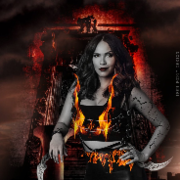 Mazikeen, also known by her nickname Maze, is a demon from Hell who holds the form of an incredibly attractive, sexy young woman. For millennia, she worked for Lucifer as a servant, lieutenant, enforcer, assistant and right-hand woman. She is the best friend and former lover of Lucifer and formerly worked alongside him at the Lux nightclub in Los Angeles before starting a new career as a bounty hunter with the LAPD.

Maze is among the oldest and most powerful demons who have existed for thousands of years. While Lucifer ruled Hell, she faithfully and loyally served him and tortured souls of deceased humans. Lucifer has called her "the most skilled and efficient torturer Hell's ever known", "one of the strongest and most powerful demons who ever lived", and "Hell's most brutal torturer". She tortured Goddess for thousands of years, but Goddess didn't have any physical form, therefore the pain wasn't as powerful as it could've been.

When Lucifer left Hell, Amenadiel came to take Lucifer back but then his necklace was stolen. Lucifer summons Maze to Earth to torture the suspects and help Amenadiel find his locket. Under his orders, she cut off his wings. Afterwards, she aids Lucifer in his various (mis)adventures in punishing the wicked. However, Maze feels that they don't belong to earth anymore, and need to go back to their home, which Lucifer refuses quickly. This caused Maze to leave Lux and take some time alone for a while to figure out where she belongs.

Back from her "getaway vacation", Maze tries not to care about everyone's problems, including Lucifer's.

Sometime in the five years prior to the series, Mazikeen was in some manner helped by John Constantine, as a favor to Lucifer, and Constantine collected on the debt during the Crisis on Infinite Earths although Maze herself was not seen at that point.

Mazikeen was working for Lucifer as an assistant and enforcer for Lucifer, and also working as a bartender in Lucifer's night club, Lux. She assisted Lucifer in various tasks and occasionally helping him with cases. She met her first human friend, Trixie (Chloe Decker and Dan Espinoza's daughter), in this club and even offered Trixie a Shirley Temple.

She later decided to leave Lucifer. She ended up sharing an apartment with Chloe Decker and Chloe's daughter, Trixie. For a while she was searching for a job before deciding to become a bounty hunter, using the name "Mazikeen Smith". She finds joy in working as a bounty hunter because it lets her hunt down humans and get paid at the same time.

Mazikeen is allowing her growing circle of acquaintance to call her 'Maze,' and her connection to Trixie and Linda is causing her to question her "soulless" status and detachment.

Maze then later decides to focus more on Linda and she starts to look for a love interest causing her to develop a temperary crush on Eve.

I'm just here to have some drama free fun and get some writing done! I love Roleplaying, Voice Acting, doing Photo edits, and writing!