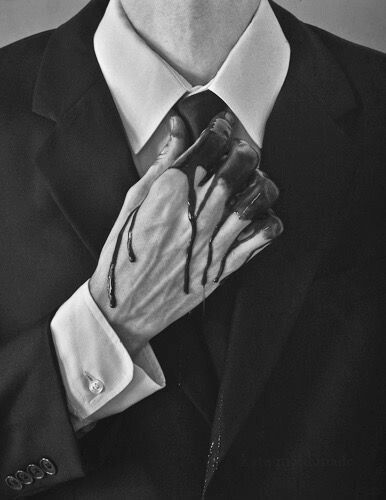 __________________________________
They danced around his office, soft piano music played in the background. They had known one another for a short while, and yet it seemed like an eternity. Smiling and laughing they danced for hours. When things began to calm, the Villain took the Damsel’s hand, spinning her around the room once more. Stopping when her back was pressed against his chest. The two swayed back and forth slowly. Her head was tilted back, resting against his shoulder. He pressed his cheek against the side of her head letting out a heavy sigh. The Villain knew this wouldn’t be able to go on. So many things could happen between them and he wasn’t willing to let things get out of hand. He was content with leaving a string of broken hearts behind. Enjoying a few more moments with the Damsel, he finally spoke.

”My dear, I’m afraid it has grown late. It would be wise if you left before the streets fill with…danger.”

The Damsel smiled and gave a gentle nod. He helped gather her things, even helping put her coat on. This was unusual behavior for him and he didn’t understand where it was coming from. Maybe it was because he enjoyed his time with this woman. Deciding it was best not to think too much on it. Opening the door for her he smiled. She smiled back, thanking him for inviting her over. The Villain studied her gaze, his eyes quickly traveling to her lips before going back up to her eyes. Before he could even think he offered to take her out to dinner. Which, of course, she agreed to. Watching her walk down the hall he went to the window staring down at the parking lot so far below him. Making sure she got to her car safely he pressed a button on his watch. Signaling to his staff, “Make sure she gets home safe.”

The Villain found himself becoming infatuated with this woman, which soon became an obsession. He didn’t understand what it was about her; could it have been her laugh, smile, personality, body? He wasn’t sure but it was becoming dangerous for him. The Damsel was going to be the end of him.

Deciding he needed to cleanse his mind of the idea of her. He went out to a bar in search of some simple…fun.

How unfortunate it was for the Damsel. Having been invited out by The Hero for a night of clubbing. They hit two bars before entering the one the Villain was in. They went over to get some drinks. Letting the Hero order she glanced around feeling a little tipsy. The feeling quickly faded when she spotted the Villain kissing another woman. Feeling her chest tighten she was pulled back to reality she glanced at the Hero next to her. He was staring at her, “Are you alright? You look pale…” the Damsel nodded giving a small smile. “Yes I’m fine…It’s just crowded.” Glancing over at the Villain she shook her head. “I just need some air.” Quickly she left standing outside the bar holding back tears.

The Hero held a glass in his hand looking in the direction the Damsel had. He knew why she left and it angered him. The Villain had gotten to her first, he had tried to stop it. Gripping the cup tightly it shattered, cutting the palm of his hand. They were enemies for other reasons (can be whatever you want), but this…this was going to far.

Exiting the bar as well he glanced around until he spotted the Damsel. Grabbing her hand he pulled her without a word to the car. They both sat in the back allowing the Hero’s chauffeur to drive them back to his penthouse. Walking inside he continued to say nothing until they reached the top floor. The Damsel was confused but remained silent until he released her hand. Looking down she realized it was covered in blood. “You’re hur-“ the hero snapped at her. “I know!” Jumping slightly she backed away not sure of what to do. The Hero sighed and quickly apologized. The Damsel stood there for a moment longer before walking to the bathroom. Rummaging around she found the first aid and returned to the kitchen where she found the Hero drinking. Shaking her head she hopped up onto the counter motioning him to come over. “I don’t need-“ Like the Hero had done to the Damsel, she cut him off. “Come here.”

Taking a moment he sighed, setting the glass down he walked over standing in front of her. She grabbed his bleeding hand and got to work. The two of them sat in silence until his hand was wrapped. “I’m sorry he did that to you…” The Damsel looked up shocked by his words.

Her eyes swell with tears that broke free and rolled down her cheeks. The Hero reached forward, pulling her into an embrace.

-DON’T use my scenario without permission!

-Be DETAILED, I want PARAGRAPHS please! Novella Roleplayers only! Please done use **, and rp in 3rd person.

-DON’T leave after two or three replies! If you’re bored, we can always rp something else!

-MALES ONLY, unless you are a female that can play as a male!

-No god modding and no controlling my character!

-Be willing to help add drama to the rp!And also be willing to play more than one character! Don’t hand your characters off to me and expect me to play them! Sure I can take a few of things get a little out of hand but not all of them!

-I have a right now to reply if your reply doesn’t meet my expectation!

-I would prefer to roleplay on Discord. Message me and I'll send it your way!