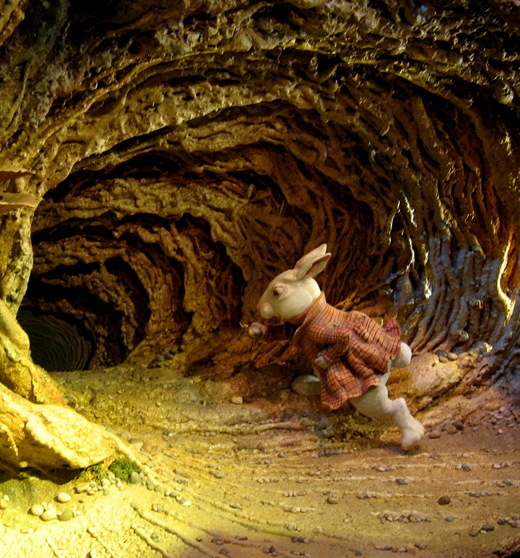 Alice’s expression shattered. Closed? But the way into Wonderland was never closed! Heart hammering against her rib cage, she closed the distance between herself and the grotesquely twisted and gnarled trunk of the tree overshadowing the Rabbit Hole and — with some effort — ripped off the rotted plank nailed haphazardly to the wood. The scrawl carved into its damp surface barely illegible. Appearing beside her, pocket watch set within his tiny white paw, was the White Rabbit. Squinting, Rabbit rose up on hind legs to peer at the plank, his little pink nose twitching excitedly.

“Do you know anything about this, McTwisp?”

“I do not! But we are late. Late, late, late for a very important date.”

Now was not the time to be reciting the usual monologue. Discarding the plank in the nearby bushes, Alice then turns to face McTwisp, visibly shaken. Wonderland was home. Or was. The Rabbit Hole was nothing more than a tuft of grass upon a moung of freshly disturbed earth. A tiny daffodil had sprung up within the center of that grass tuft, its thin green stalk bent slightly to the right.

“Come, Alice. We cannot stay here! There is danger afoot.” the crimson glare from McTwisp’s beady eyes swivel from left to right, as thought searching for the impending danger. Alice could neither see nor hear whatever it was the Rabbit was sensing therefore she didn’t seem as alarmed.

The White Rabbit plucks out that pocket watch, flips open the casing and peers at the hands spinning uncontrollably around the cream colored watch face. Latelatelatelatelate.

The atmospheric pressure surrounding them would shift and the skies would darken beyond intelligent reasoning. While Alice is otherwise distracted by the sudden turn in the weather conditions, McTwisp went about surpassing her and pouring something into the mound, reinforcing the earth and making sure that Wonderland would be inaccessible to anyone, and anything. The luminescent blue liquid acquired directly from the Vale of Tears thrums gently, giving the mound the appearance of the earth breathing. Once all the liquid has been emptied and the breathing ceases, McTwisp caps the vial from which it was poured and slips it back into the hidden inner pocket of his waistcoat, patting the exterior material with a satisfied dip of his head. Alice, oblivious to what’s just happened, turns on heel and pouts.

“Here, drink this…” McTwisp retrieves another little vial from his pocket, looking as innocent as ever. His ears twitch almost as excitedly as his nose as he offers it to her. “Trust me, Alice.”

Trusting the Rabbit was the last thing poor Alice should’ve done. Uncapping the vial, Alice tips her head back and downs the clear liquid. There’s a warm, almost numbing tingle at the back of her throat as she swallows. No sooner had she returned the now empty bottle would she be able to feel the effects take ahold of her. Fwump! Her eyes slip shut and her body takes on a weightlessness. For a moment it feels as though she’s flying. Or falling. Falling seemed a more appropriate description. And then… complete darkness creeps in, consuming her mind.

Alice awakens. She’s back in the good doctor’s office. There is a clipboard sat upon the squared lap of Dr. Bumbleton, Alice’s therapist and the resident pervert here at the Asylum. He seems pleased with the day’s findings, his tongue clicking absently against the roof of his mouth as he scrawls his notes. “That is all for today, Alice.”