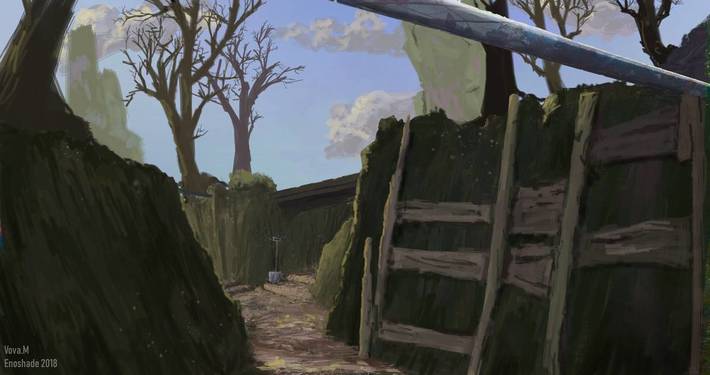 Rimworld: Verus-4 A small planet being invaded by the empire for its unrefined spice resources.

The Maidens were tasked to help a group of rebels run them out of the channel and help secure the trenches.

It was hard to imagine the sunshine above as it had been several weeks of grey smoke-filled skies above the battlegrounds in which the maidens had been fighting on. The ground they gained alongside their allied forces was not won by dreaming about what was hidden up above, but rather by unforgivable actions they needed to take to win such ground. Shin deep in muddy trenches that seemed to have endless turns, curves, and dugouts. Filled with starved men and women that served their empire, but were usually met with a brutal end by the hands of those that identified as Maiden Company. However, after weeks of fighting it seemed to have finally paid off. A small encampment was left abandoned. The smoldering campfires, the fresh food, and personal belongings left behind told Flare that they left in a hurry. This probably wasn’t abandoned out of fear, but rather a strategic move made by the imperials to reinforce the positions they had ahead. She was quick to call the order for the Maidens and the platoon of rebels to search the camp for clues, survivors, and traps. But two were to be left at the entrance to keep watch, and those two were the great duo… Axel and Plaz.

Needless to say, they were beatin’ feet to the entrance on Flare’s orders. Plaz was a little less happy than Axel was doing lookout for the others. Plaz followed behind Axel, holding the flare gun, and also trying to light a damp cigarette was quite difficult so her walking speed came to a short halt till she got the thing lit. “Plaz! C’mon! Flare’s counting on us you know!” Axel shouts with a big ole’ smile on her dirty face. Plaz sighed, simultaneously exhaling the smoke held in her lungs. “Yeah.. yeah… I’m comin’…”  Axel was already at the entrance. “Look Plaz! I found us a dry spot! We can share it! C’mon!” Plaz made her way there, eventually poppin a squat next to Axel on the damp makeshift seat. “Move over, Kid. You’re hoggin’ up all the damn room..” Axel was quick to move, ultimately losing her spot she found, but she was okay with it. Plaz got settled in, making herself comfortable, stretching out a leg and leaning back, taking a long drag from her stogie and taking in the cool breeze that found its way blowing through the trenches Axel watched her quietly, a wide smile and her big eyes just taking in the sight of the tired maiden before her. “Plaz, how did you get so cool?” Plaz exhales, smoke quickly being swept away by the wind. She flicks her cigarette, kindling the end and dismissing the ash that refused to flake away. “How’d a kid like you get so damn nosy…?” Axel giggled, as Plaz stared off in the distance, letting her eyes fixate on a stack of playing cards the guards left behind on a table a few feet away from where they were sitting. “I dunno! Maybe since I was little… Oh! It’s gunna be my birthday in a few days! Plaz, I’m gunna be seventeen! And my birthday wish is you’re gunna teach me how to smoke ciggies like you!” Plaz shook her head and scoffed. “Pfft… Yeah like I need another bitch stealing my cigarettes around here… Not in your wildest dreams, kid. Besides, smoking is bad for you or some shit.” There was a long bit of silence between them, as Axel’s birthday wishes were just shot down before her eyes.

Plaz ran her fingers through her hair… About a month ago it was a smooth pompadour that rested on her head, clean and upkept, now it was a glorified mop, not nearly as messy as Axel’s… Plaz at least had a comb. The muddy green bandana tied tightly around her forehead was the only thing keeping it from getting in her eyes. She looks over to Axel a moment and flicks the cig again. “Hey kid, you uh… got any snacks?” It had been a while since any of them had eaten a good meal. Rations and anything they could scavenge was breakfast, lunch, and dinner. It’s the life you live when you’re under equipped for a job as large as pushing out a foreign empire from your lands. Axel’s face lit up. “I sure do!” She reached into her pocket to pull out a little linen-wrapped package of dried meats. “Mystery Jerky!” The smell alone would make anyone reject the offer. Plaz’ nose wrinkles at the smell and sight of it, but after a few seconds of staring she goes in and grabs two thick pieces and tears a small strand of one of them off and puts it in her mouth. It was too tough to chew. The damned thing was like chewing on a baseball glove. Axel smiles, simply happy to help. She didn’t really care that Plaz didn’t even say thank you. “Plaz, what’s your favorite brand of cigarettes?” Plaz took a moment to stop gnawing on the jerky to answer the young maiden. “Red Apples. Don’t go gettin’ any funny ideas, Kid. If you see any you give them to me, got it?” Axel blinks, looking up kinda confused. Plaz sighs and shook her head. “Sorry… this whole thing’s got me all fucked up. Can’t think straight, I’m hungry as fu-” Just then a few gunshots rang out and screams could be heard, shattering the silence. Plaz was quick to grab her weapon and stand up to see what was the issue. But, thankfully it was just Flare dragging out a few imperial soldiers and trench workers out from the barracks. They were all thrown in the center of the camp as if it were destiny that called them all there.

Plaz kept her eyes glued on the situation, she became less tense knowing Flare has control of the situation, but ever more curious as to what she had in store… or the why of it. Why was Plaz here with Axel and not over there helping round up the stragglers? “Is everything okay, Plaz? What’s going on?” Axel was a little worried, she was getting up and trying to shake the dirt from her hands. “Yeah, everything’s fine, kid… Sit down, get comfortable. We’ll be here a while.” Plaz was still standing up, watching the whole thing go down. Axel sat back down on her spot on the ground. “Plaz, you sure we don’t need to-” Plaz was quick to toss Axel her switchblade comb. “Here, play with that. You’ll need to do something with that tumbleweed you call hair, Kiddo.” Axel looked in her lap to see one of Plaz’ prized possessions, right before her. “Woah! R-Really? Last time I took this you gave me a noogie!” Plaz spat out a piece of the jerky. “Yeah, but you’re a long ways away from bein’ as cool as me. So get to practicing on that mop of yours.” Plaz watched the rallied men be kicked around and mocked by the rebels. Questions probably weren’t asked, especially without Plaz being there. Everyone knew that Flare was a woman of few words, and it was safe to say interrogation was not her strong suit. Their screams, cries and pleads even could be heard echoing down the hill a little ways, reaching Plaz and Axel’s ears. “The fuck is she toying with them for…?” Plaz spoke under her breath as she tried to unfold the situation from afar.

It wasn’t long after that familiar roar of Flare’s flamethrower was heard, what followed that was three screams of torched men. Plaz was less than pleased, Axel grew more curious. For Plaz it was a lot harder to deal with on the amount of sleep and food in her belly. “Plaz, what’s going on out there..?” Plaz was quick to snap at Axel to try and extinguish her growing curiosity. “Axel, shut up, and comb your fucking hair! You wanna look good for your birthday don’t you?!” It was hard to keep these things from her. The killing was inevitable, but the way that the other Maidens were to let off steam, could easily put a sour taste in a person’s mouth about them. That would be especially bad if it were one of their own.  Axel gulps, and began to run the tough metal bristles through her tangly bushy hair… the teeth would get caught in the knots and bits of mud that riddled the kid’s hair. She winced in pain and even tore out a bit of her hair, though one wouldn’t be able to notice in the jungled hairdo. As Plaz watched the flame engulfed figures kick and scream till their last breaths, it finally clicked to her. She’d look down at Axel and realize Flare’s intentions. “Hey, kiddo… You uh… you don’t gotta hurt yourself, I’m… I’m sorry.” Axel looked up at Plaz a moment, realizing that she just apologized for the first time ever before. “I should be a better… you know… An older sister to you. After all, you’re a Maiden, remember?” Plaz flicked the neglected cigarette that had gone out a long time ago. She drops it on the ground and smooshes it below her boot heel. “Well, c’mon.. Lemme show you how to properly brush that fuckin’ mop of yours.”