Kirishima stays incredibly active throughout the year between school, working at the Fatgum agency, and seasonal activities in his down time.

He takes advantage of the warm Spring and Summer months to do outdoor recreational activities. When he is not in school or working, he and his friends partake in things such as football and baseball matches, capture the flag, dodgeball, jogging, hiking and rock climbing. He also enjoys going to the pool or the beach, both for training/workout purposes and for the fun of it.

Fall brings various festivals and carnivals to his area, and Kirishima does his best to attend at least one or two per year. He and his friends continue doing outdoor activities even into the cooler months, and mountain hiking tends to be a favorite fall activity when they have time. Kirishima loves the holidays that the fall season brings, and eagerly participates as they come. His birthday is also in October, which is an added bonus to the season.

Winter and snowfall brings sledding, highly competitive snowball fights, occasional winter hikes, and more holidays. He likes the Yule/Christmas season and everything that it comes with. He and his classmates have a traditional Winter party that consists of a potluck, gift exchanges and various Yule or Christmas-themed games. He also loves participating in traditional New Year's activities. If the weather is too bad to go out, Kirishima spends his down time either playing video games or sleeping.

His physical appearance doesn't change based on his season, but his wardrobe does. He typically wears short-sleeved shirts, tank tops or cut-off shirts with shorts when it's warmer out, or he will simply go shirtless while playing sports or at the pool/beach. He dones typical winter attire when the temperatures drop, but his companions often have to yell at him to put on a jacket (or a shirt) when it's winter time. Kirishima is warm-bodied by nature and argues that he doesn't need a coat, but he almost always eventually gives into the cold and puts one on if he stays out for too long. 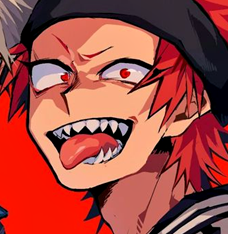 Kirishima has a few habits that some may find annoying. His shamelessly boisterous and extraverted nature can be a bit much for some people right off the bat. He doesn't have a very good inside voice, and is prone to talk too loudly and make abrupt exclamations while indoors. He does know that his loudness can be a bit much, and has learned to correct his tone to a more "indoor" voice if he catches himself doing it. He is also good about apologizing and keeping himself in check if his loudness called out.

His talk of chivalry and honor tends to be a little... cliché, and has earned him an eye roll or two from time to time when it comes up. He does know that those sort of outlooks are not everyone's cup of tea, but he refuses to be ashamed of following such morals.

Kirishima also talks with his mouth full from time to time, especially if he gets pulled into a conversation on topics he's excited about while he's eating. 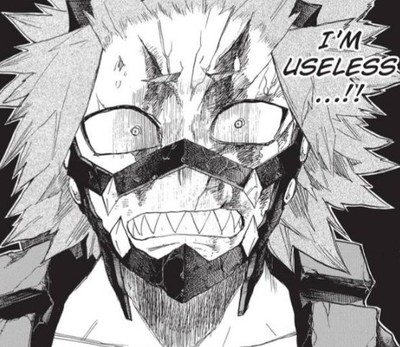 Kirishima models his life after a code of morals and honor, and is  incredibly steadfast in his willpower. Getting him to break down and turn his back on everything he's worked towards will take a lot of repeated attacks. There were two major events in his life that successfully shattered his spirit, which did result in him wanting to give up on himself and all that he's worked for. Kirishima was always able to shake himself off and get back up with an even stronger fighting spirit than before.

However, repeatedly breaking his spirit, making him question himself and his reality, and making him question who and what he's really fighting for would be the way to chip away at his resolve. He takes betrayals to heart, so either being betrayed multiple times or staging multiple betrayals by people he cares about may be the "last straw" to turn heartbreak into raw anger. 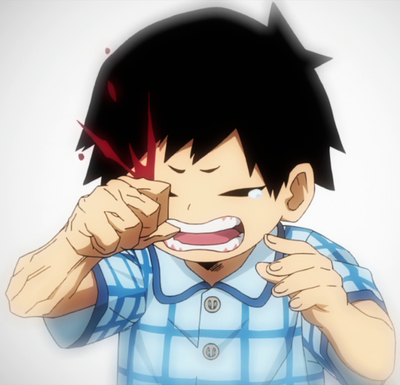 Kirishima's ability allows him to use his body as both a weapon and a shield, so he does bear a few testimonials of survival. The bodily scars he has from past battles are not super noticeable right off the bat, and the pale scar tissue takes on the form of scattered streaks or asymmetrical "patches" on his skin where the larger injuries took place. These are more concentrated around his chest and forearms, for those are the parts of his body that are used to shield himself and others from direct attacks.

Kirishima has one scar with a significant backstory:

He was about four years old when his ability finally manifested. He was rubbing his right eye when his whole arm suddenly became sharp and jagged, which resulted in him cutting his eye and slicing his face. Doctors were able to save his eye without loss of vision, and all that remains is a scar that stretches over his eyelid and up nearly to his eyebrow. 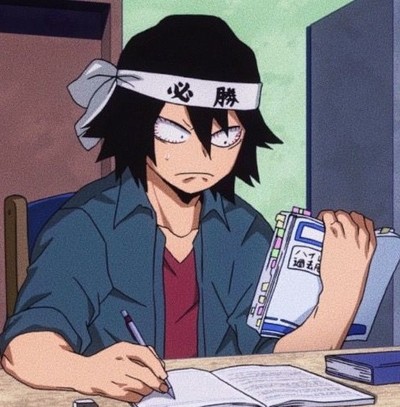 Not much is mentioned about Kirishima's parents. His mother was specifically mentioned once in the whole series, and a father was never brought up. Kirishima is shown to be highly independent and self-sufficient even from a very young age. His backstory revealed that he strengthened his abilities on his own, and both trained and tutored himself for the entrance exams in order to get into UA highschool. Due to this, it is uncertain how involved his guardians are. The headcanon: Kirishima's mother may work a lot and most likely doesn't have a lot of free time to spend with him, but Kiri (canonically) has never mentioned or shown any sort of resentment towards family at all.

He now has one Temporary Glowstick Mom who provides endless sandwiches