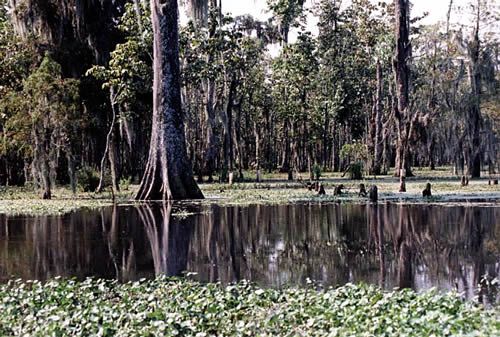 On the swampy shoreland of the ancient Lake Texcoco air hung heavy with moisture and mosquitoes, a damp sheet lay atop the buzzing night. The swamp seemed to stiffen with the vibration of insect calls, amphibious cries that patched holes in an auditory net that ensnared with efficiency.
The longer Victor crouched the more the cacophony pierced his thoughts, his knees ached and his toes had gone numb- his boots having sunk a good inch into the murky water.

There was not a precise shore to take refuge on, instead the sick sucking gurgle of mud would turn to the bubble of water the further away from obvious land one got, but the water would not drop off to it’s true depths for another ten yards.

Not wanting to lose the advantage of being dry and on firm footing, Victor was lingering further back from the water's depths than he would have preferred.
In fact,  a lot of things were not preferably right now, there was very little high ground to take. He had considered scaling a tree but none were close enough, high enough, or covered enough, to be of any tactical advantage.
So he had found a relatively covered spot behind low growing shrubs, the same spot he had crouched the night before, and the one before that.

He was beginning to doubt his decision on stakeout location. He had come to the conclusion based solely on the reported location a survivor of one of the attacks had given.

There were few accounts to go off of, after the discovery of the second body- mutilated horrifically and left on the bank- the outer reaches of the lake were to be avoided at all costs.

Perhaps the beast had realized this as well and moved on, the reactive intelligence of this being was unknown to Victor. Reasoning with it would be unlikely, Ahuizotl, as the local lore would have it, were not exactly friendly creatures; and this one had clearly gotten a taste for humans.

The frogs seemed to cry a little louder and Victor let out a frustrated sigh as he shifted his stance just enough to relieve the tension in his joints. His boots came up to his ankles and his black cargo pants were waterproofed and shoved into the crest of the boot to avoid moisture but still his feet ached.

It was moments like this that he considered returning to New York, to his penthouse with air conditioning and comfortable furniture. Just as quickly as the desire overcame him it was followed by the cool wash of guilt. It made a tingle run up his spine to recall his home, he could swear the faint scent of pastries wafted across the swamp air and he closed his eyes to relish the lingering memory.

Standing from his couch, setting aside a glass of scotch, pricking with condensation, pausing to move the glass to a coaster before he moved to the doorway of the kitchen - freshly straightened from the cooking that had been done. The oven glowed with growing treats, filling the flat with a homely warmth. Turning from the kitchen, through the dining room littered with schoolwork and crayons, he continued down the hallway, past the walls of spotless glass behind which fish wandered aimlessly, the doorway to his brothers room- he could hear him playing with action figures, the door to his room- behind which wound a cat in a circle on his bed, only so inclined out of her disdain for Victor. He didn’t stop to shoo her, he normally would but he was too concerned with the door ahead of him.

He crossed the open balcony, unaffected by the dense city scenery, or the alluring trickle of the pool.

Max's greenhouse sat against the concrete backdrop like an oasis in a desert; before he even reached it he smelled the sticky sweetness of blooming flowers-they burst from the building- it was hardly able to contain the vast and growing empire of vines. It drew him like a moth to flame, alluring and hypnotic.

Victor recalled how cool the handle felt in his hand, the way the misty air burst past him- the prickly of the hairs on the back of his neck.

Despite the humid air of his current hiding place in Mexico, he could almost taste the crisp freshness of the oxidized air. Past the din of insects and chorus of frogs Victor heard the delicate dulcet tones of Max humming from the depths of his mind.

He couldn’t see him past the walls of plants, bursting happily from their pots, but he felt a radiance, a warmth that was so familiar and kind, he knew he was close.

As Victor stepped forwards into the bright white space he heard a scream behind him.

For the first time in a while he felt a pang of fear, turning from the lush green sanctuary; locking the memories of a lost love in there with them, to be sealed away for another time.

Jonathan had been his first concern, his first thought. But as his eyes flew open he was reminded of where he was. His brother was nearly a world away, safe in the hands of loved ones.
No, that noise had come from the lake, from the depths of the water not his mind. It sounded like a child's wail, broken and fearful, it had struck an instinct in him.
But Victor knew better, the myths and legends of the area were quite informative on that front.

From out of the water wound something similar to a snake, peaking a few inches above the murky ikor. It surveyed the treeline for predators, or possibly prey, before the tip unfurled into five smaller appendages akin to fingers; they lurched in odd directions- smelling the air before another cry pierced through the veil of swampland buzzing.
Victor took in a slow breath through his nose and sank a little lower onto his haunches, peering through the low growing shrubbery and locking away his unprocessed guilt for a future Victor to deal with.

If he lived through this, that was, whatever was slowly rising out of the swamp water.

It walked on four muscular bowed appendaged that had no qualms wading across the bottom of the muddy swamp.

It was safe to assume the claws at the bottom were of a sprawling size. The beast's head rose over its wide shoulders, sharply angled with pointed ears and snout.

The moonlight glinted in its saucer sized eyes, as water fell away and took the swamp moss and debris with it, Victor could better make out its form. It was hound like, though it had features that rang to Victor as reptilian. It had no fur or hair, but instead a slick amphibious skin with quills that lay back along its spine.

Despite himself, and the sticky swamp air, a shiver ran up Victor’s spine as he watched the creature rise from the murky water.
A low clicking sound echoed through trees and Victor rose carefully behind the length of a tangle of thick vines and moss to better spy the source.
Normally he was not one to rush into a case with the intent to kill, and it was not his goal now. Detain and capture was the optimal goal...not necessarily the likely outcome- as Victor was coming to realize.

The beast landed around the size of a male lion with a females toned physique, and even in the dark at a distance Victor was aware that it was all muscle.

Much as if someone armed a fierce wolf with a scorpions stinger this animal had reach on top of tremendously over powerful jaws. There were too many points of contact, a distanced attack would be optimal, but it needed to be quick as not to scare it back into the water.

From his crouched stance Victor dug his fingers into the mud beneath him and pulled out a substantial amount in order to draw a sigil upon the wood of the tree.

He moved slowly to avoid the animals attention which seemed divided among smelling the air, much as a dog would, and curling and unfurling its long fingerling appendages.

Victor wandered faintly to himself if this creature was so curious of the air because of his scent, though he was downwind and surely smelled less pronounced than the swamp between them.

He didn't rule out that perhaps he had already lost his advantage.

It was important that he move quickly; he swiped his hand across the sigil, with a crackle smokey tendril flickered from the activated spell, and Victor raced them, high stepping through the sticking suction of the mud towards the hulking reptilian animal.

The Ahuizotl, if it had not noticed him before, noticed him now, it turned its head towards him , tilted it, and the clicking sound was better revealed to Victor. The spines that ran along the creature's back skittered like a snake's tail, the hollow shells clicked against one another in a death rattle. It lowered itself onto his haunches and rocked forwards to launch itself and the quickly approaching Victor.

It did not appreciate it’s confinement and the spindly fingers of its scorpion tail struck the barrier over and over like an angry mine.

The death rattle was marked with childlike wails of agony, they made Victor stop a few feet back from the warbling barrier. Despite looking at the creature through the purple hue, watching it part its long snout, its rows of teeth glimmering, he couldn't quite believe that the human noise was coming from the creature.

It only took another buck from the creature to cause the projected barrier to bend and groan weakly.
Victor cursed under his breath and pressed his hands to the faltering protective spell,
“No no no...stay. Stay. Calm down. I don't want to hurt you.” His words faltered, a feigned grunt escaped him before he focused his energy on speaking a low incantation in a foreign tongue in order to strengthen the failing magick. He twisted his flat palms against the reinforced wall and the dome became a little bit smaller, but this just made the animal buck harder.

It must have only been seconds, perhaps a minute, but the struggle felt like is lasted a lifetime. Victor’s boots and pants were soaked to his knee and sweat was prickling on his forehead with the effort it took to hold the containment spell together.
But he had indeed underestimated the sheer power of the reptilian canine, and with another angry childs wail it slammed the sprawled appendages next to Victor’s closely pressed face. The spell was broken and Victor was tossed back, the last image before the thick mucky water overtook him was of the beast's long tail waving in newfound freedom.