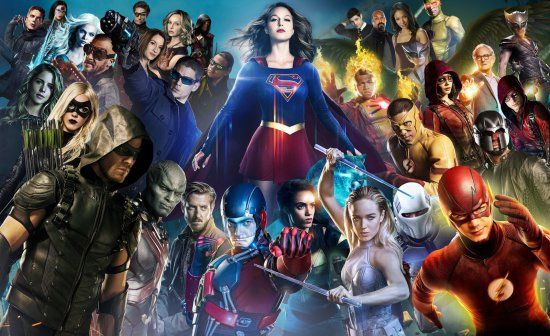 This is the DC realm and Crossovers and Original characters are welcome here. This is just a place for everyone from the verses, realms, and other worlds, can kinda just come together and have a good time writing together. We are a chill and nice group, Feel free to check us out and Possibly even join us! If you need anything Please contact an Admin or the owner of the group. 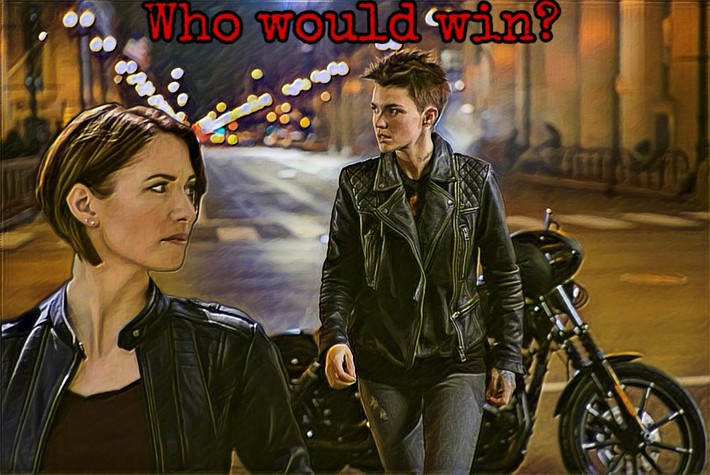 However first please go over our rules: '

1. No putting others on blast.

2. No rushing, GMing, Controlling, or killing another person's character without their consent.

6. No bullying, nor trolling

7. No self-harm posts of any kind.

These rules are subject to change. Enjoy and have fun. It's no secret that both Superman and Batman's cities are based upon the same real-world location: New York City. (Which isn't to say that there isn't also a New York City in the DC Universe; that's where the New Teen Titans were based for quite some time.) It's been suggested that Metropolis is an idealized version of New York at its best, while Gotham shows an exaggerated take on the city its worst. This might explain why the two have generally been portrayed as being relatively close to each other — and placed traditionally in New Jersey, of all places. In the upcoming Batman v Superman: Dawn of Justice, the two cities will officially be neighbors, likened by director Zack Snyder to San Francisco and Oakland — except, of course, on the east coast.

Judging by their profiles, Gotham is the more blue-collar sibling of the highfalutin' Metropolis, with the former built on manufacturing and shipping industries while the latter focuses more on "its long-standing tech industry" as personified by the Avenue of Tomorrow. Both the comic book and movie versions of the cities place an emphasis on Gotham being filled with long-standing gothic architecture, while Metropolis is filled with more recent skyscrapers that act as aspirational reminders to look, up in the sky. 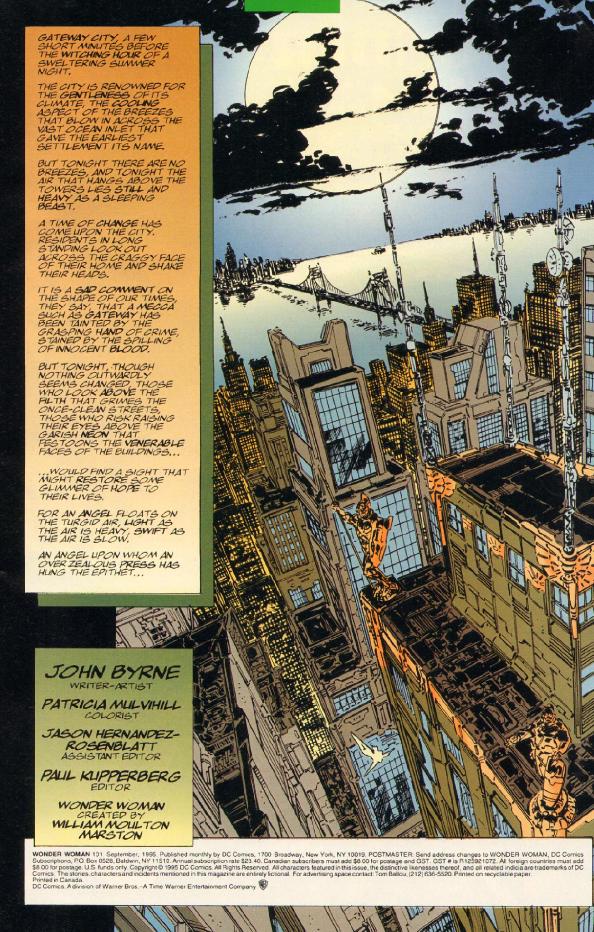 It's not clear just yet where the cinematic Wonder Woman resides — although she will, presumably, still hail from Themyscira, better known as Paradise Island, the fictional (and magical) island populated by Amazons somewhere out in the Aegean Sea — the comic book heroine has a history with Gateway City, a harbor town on the west coast that has also been the home to supernatural hero and part-time wrath of God, the Spectre (The city actually debuted in a Spectre story in 1966's Showcase No. 60). Home to the largest collection of Greek artifacts in the U.S., which is presumably what drew Diana to the city, Gateway is one of a couple of locations in the DC Universe version of America that acts as a stand-in for San Francisco. Unlike Superman and Batman, however, Wonder Woman has been somewhat mobile throughout her seven decades-plus in comics; she has also been based in both New York City and Boston at various points of her career, neither of which are fictional despite how hard some may wish that were the case.

DC's other home to fake tales of San Francisco is Green Arrow's hometown — temporarily renamed Starling City in the early seasons of the CW's Arrow, although it's been called Star City in comic book mythology since its 1941 introduction in More Fun Comics No. 73. A port city located somewhere on the west coast of the United States in its current comic book incarnation, its location hasn't always been so clear; 1985's DC Comics Presents No. 87 saw Superman cross over to our world and note that Star City had been replaced by Boston, while earlier references to its comic book location had suggested both Connecticut and somewhere in the region of the Great Lakes. (To make the matter more complicated, an onscreen map that appeared on an episode of Arrow suggested that Star City was actually Des Moines, Iowa, even though the show has repeated talked about the city being on the Western Seaboard.) 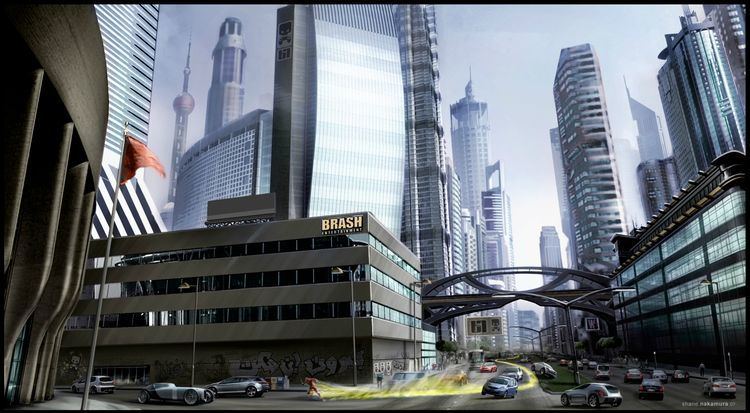 While there are many Central Cities in the real United States, the one that Barry Allen runs around in both comics and CW TV show is a fictional city located on the edge of the state of Missouri (as per not only current comic book continuity, but also references in The Flash TV show and Young Justice animated series), although it once belonged in Ohio (1974's The Flash No. 228 and 1987's The Flash Vol. 2 No. 2 both made that claim) and, in 2004's DC: The New Frontier, in Illinois. Its real-world analog would be Kansas City, given that Central City is paired with Keystone City, which exists just across the water in Kansas.

Quite how that works with the oft-stated assertion that Central City and Star City are only 600 miles apart is anyone's guess (Kansas City is around 1,500 miles from San Francisco). Let's just pretend that, while DC's comic book Earth is larger than ours, the CW's Arrow/Flashverse United States is somehow smaller. Or, perhaps, has a surprisingly different geography with regards to where the states actually lie in relation to each other.

National City, Supergirl's stomping grounds, is a rarity in terms of DC media properties in that it has no comic book incarnation (It is, however, named after the original name for DC Comics, "National Periodical Publications"). Given that it's a city that contains a port, a tech company and the headquarters of at least one worldwide media company — albeit one that's called "CatCo" — and a city that's suffered earthquakes and wildfires, it's not too much of a stretch to suggest that it's an alternate take on Los Angeles. Which isn't quite the location of the real National City, but it's close. 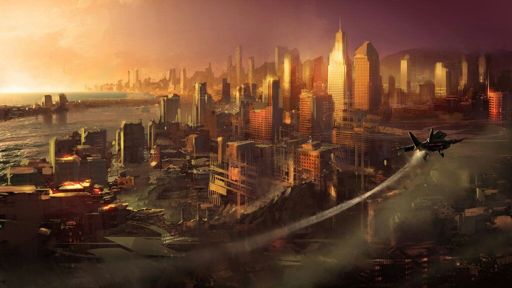 The name "Coast City" has been mentioned a few times on both Arrow and The Flash — Barry Allen believes it has the best pizza on the west coast, while it was the city where Oliver Queen was discovered by Amanda Waller — but it's better known to comic book fans as the home of Hal Jordan, AKA Green Lantern. It's also the setting for the 2010 movie Green Lantern, but the less said about that, the better. Its location has remained essentially constant since its debut in 1959's Showcase No. 22: Southern California, more or less in the region of San Diego. Following its destruction by alien invaders and subsequent rebuilding, the inhabitants of the city have taken to calling it "the city of no fear," somewhat ghoulishly. (It was temporarily pushed into Northern California by 2004's Green Lantern: Rebirth, but as we've already established with Gateway and Star Cities, that area is already well covered by superheroes.)

It should be noted that Coast City doesn't actually replace San Diego in DC's comic book mythology; that city also exists, or did until it plunged into the Pacific and became home to undersea dwellers, being renamed "Sub Diego." Yes, that actually happened; I blame Aquaman. 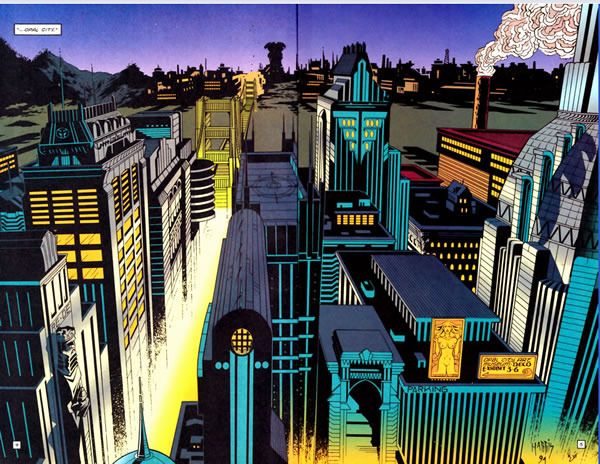 Even before Barry saw Kara while crossing realities, the first connective tissue between the universe of the CW's DC shows — specifically Arrow — and CBS's Supergirl is Opal City, a fictional location that has been mentioned in both series (On Supergirl, it's where Cat's son Adam lives). In DC's comic book mythology, it's the home to both the Elongated Man and Starman, as well as a number of supervillains; although its location has never been definitively stated, Opal has been vaguely situated somewhere inside Maryland, as per the wishes of fan-favorite Starman writer James Robinson.

The location of Midway City might be gleaned from its name  — midway between the east and west coasts of the United States  — but the (fictional) reality doesn't follow that logic in the slightest. Traditionally the home for Hawkman and Hawkgirl as well as the superhero freakshow known as the Doom Patrol, Midway (which will make its big screen debut in this summer's Suicide Squad) was modeled after Chicago, Ill. but has been officially placed near Sault Ste. Marie in Michigan since 1977's Detective Comics No. 470. At least until Suicide Squad claims differently ...