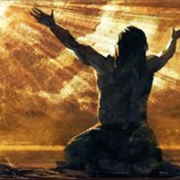 Soft and agreeable features with a lean, sleek sense of dress with gold strung through his hair, Sylvan bears the telltale marks of his people. A thick, black tattoo that runs the length of his neck to signal to others of his former slavery. It stands out even against the man's dark skin and outlines the lovingly made array of tattoos (tatau) that line his body.

Two years of brutal and draconian training alongside his entire generation have left him with a soldier's body, stripped of fat and leaving behind only his killer, snakeish grin that makes him look like he wants to sell you something.

Vulgar, talkative, a powerful sense for right and wrong with a willingness to forgive or participate in what society looks down upon. Smuggling, kidnapping, piracy.

Science, finances, culture and history, talented individuals, exploration. Greatly enjoys thrills and documenting the people he meets and the things he sees.

When he came home with splintered fingers and sun-kissed skin from labor in the docks, Sylvan's brother would, with creaks in his bones, without fail, pick up the hand puppets he'd made and tell his baby brother his favorite story. A story about an island that knew only peace and abundance where a wolf and a lion loved one another very much. They did. They did.

Sylvan does not remember his brother, but he does remember the island, the love, and the well he grew up in.

He had not always been a slave, nor did he know he was one when he was purchased, but when he and his brother were sold at a bargain auction, their terms were clear enough to his brother. Their master had them meet a monthly payment, else they would be shipped to one of his plantations to work instead. Too young for work, his brother found a cramped, reeking well that he would be safe and surprisingly cozy in. Straw was easy to find, and though the antechamber leaked into the sewers, that only meant adventure for this boy. Toys, medicine, food, all were provided by his doting older brother who would spend as much time with him as he could before sleeping and working as a cook, in construction, painting, acting- whatever was necessary to pay their rent. When it wasn't enough, he'd find his gang of pickpockets and burglars, many of them other slaves given the same offer. When he painted, he'd spy inside windows and see silverware and luxury that would feed his brother for years. When he heard of a heist, of the money and bribes flowing inside the city and heard the commotion on the streets about mercenaries and professional pushers and thieves, they knew they would take part.

They had not expected it to the crown of the emperor.

Intoxicated and enraged as eight-thousand soldiers overturned the city, having ambushed and slaughtered those that had originally stolen it, Sylvan's brother realized he'd damned them: they had nowhere to turn with the property. Nobody would take it from them. Throwing it into the sewers in a fury, an ignorant Sylvan awaits his return, amazed when something shiny makes its way down into his home, putting it on his head to show the other children to play with.

Confused, stunned, and annoyed, when soldiers spot the small, dark-skinned boy playing king and ordering around his fellow street urchins all the whilst wearing the emperor's crown, they're quick to demand an explanation for him, striking him and quickly regretting their poor choice of target when Sylvan bites off the tip of his attacker's finger.

A nearby and amused baron intervenes on the boy's behalf, taking him and the crown into his protection to be presented to an enraged emperor who demands the boy's head. Unimpressed and encouraged by his wife that very same baron would throw his legendary reputation away to save Sylvan, purchasing him in a scandalous display that would cost him dearly, but in exchange buy the loyalty and adoration of one wily, strange little former slave. They would not stay long in the city, the baron's ownership of the boy dissolving the moment they reach his faraway home, freeing him in the shadow of a swaying corpse that hangs from the tallest tree.

Beautiful and cold, Sylvan will come to know over the years a troubled land whose people's only reward for their struggle is depopulation, a sluggish economy, and a pension program that will bankrupt them.

In an age of global commerce, imperialism, and gunpowder, a rapidly evolving vortex of politics and technology surrounds his plaguing new home. When his former master adopts Sylvan and names the boy his heir shortly before his death, it's not enough that Sylvan must overcome those that would deny his father's wishes and oust him from power. Ambition and God call out to him.

There are at least twenty million slaves in the world. Nothing less but a two-bit scoundrel will be enough to save them and slaughter their masters.

A poor fighter. Physically powerful but lacking the necessary talent or interest to truly become a soldier.

A keen understanding of logistics and supply; trade, moving brickwork and laborers to repair roads, so on.

Relentlessness. Sylvan genuinely believes himself to be a messiah with a God-given mission to liberate the world of tyranny and will stop at nothing to see it through.

Highly educated, Sylvan had the unique opportunity to be the pupil of one of the world's most reputable and glorious scholars and philanthropists. He knows more by the age of twenty than most creatures alive do.

I do GM-and-Player stories about ambitious people struggling to make the world a better place.

Started by Sylvan in Looking for Roleplay (Out Of Character)

"Have I ever told you you're a magnificent scoundrel?" Both original, Dragon Age, and Star Wars fandom plots alike.

Started by Sylvan in Looking for Roleplay (Out Of Character)

Started by Sylvan in Roleplay (In Character)

I am an advanced/novella writer seeking GMs of similar background. When you message me include a…
See More

I must thank Raoul Peck, for, without him and his struggle for the recognition of exploitation and…
See More