Peach-ish skin, Pink flats, A pink shirt that stops at her midsection, Pink pants that stop a little after her knees with a short pink skirt, Gray/brown eyes, Pink bands around her wrists, Brown hair with the bangs long and off to both the left and right sides of her head and the rest of her hair in a long braid.

Cheerful, Energetic, and Athletic. Never make Ty Lee sad, or she'll make you pay for it.

Being yelled at, Being threatened; because then she's forced to use chi-blocking, Being called a "Circus Freak".

Ty Lee grew up with 6 identical sisters who all looked exactly like her. She joined the circus because she was scared of spending the rest of her life as part of a matched set, where she improved with her flexibility and learned chi-blocking: an attack she uses where she strikes out at a person's pressure points on their bodies using either her fingers, feet or fists in a series of quick jabs, their limbs numb and they collapse to the ground; unable to move. But that is temporarily, because it wears off in a few hours or so. Ty Lee was voiced by the voice actress Olivia Hack.

Flexibility, High jumping, Front and back flips, Cartwheel, Jump from object to object, and of course: Chi-blocking. 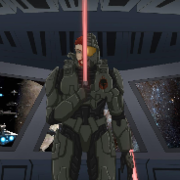