The Underworld is comforting in the same way the modality of a normal life suits some people: The same sidewalks in the same town lead to the same job and back home again where they let the dog out, eat a bland dinner, and fuck their frigid wife.  Eddie has been living in similar creature comforts for well on fourteen years now - without ​incident - He just happens to do it in Purgatory.

Until recently, he had his niece Angie to keep him occupied in that confused way those souls who don't pass over the River are forced to wander through a half-life.  He'd pity her more if he wasn't such a selfish son of a bitch who is happy for her company while he drives back and forth on an endless autoloop across the River Styx.

As it is, her father, Eddie's brother Kurt, is always at the epicenter of whatever is going wrong in all of their lives.  Why can't he just get his shit together?  Because Kurt is, quite possibly, the worst demon of all time, screwing everything up, always. Likely, the entire reason that Eddie has found his way to the surface to breathe fresh air and feel the chill of a spring night on his face is because Kurt refuses to just do his fucking job and reap souls for Eddie to ferry.  These two and their professions sound far more powerful than they actually are -- the brothers O'Connor are nothing more than Union workers from Hell taking out the trash for a paycheck cashed in Abraxas Coins and Forbidden Fruits.

Upcycling happens every couple of decades, when Cain decides he wants to walk a righteous path and condemns Abel to certain purgatory.  Such is their fate to be lived and relived. Reincarnating to do all over again and rise from the ashes and return to the mundane tribulations of their very blue-collar birthright.

Because corruption ​wants to corrupt absolutely.

He can think of no better way to pass his second night on ​Holiday than to come play with Needful, Fragile Things.

Sometimes you just have to get out of your own personal hell. ​

Aside from being a total ass, Eddie can be deeply introspective -- when he's alone. When no one is looking he doesn't feel compelled hide inside the horned tribal mask of a demons pretension. The thing about evil is; it never wants for anything. You don't have to be conflicted about the moral intricacies of being politically correct because you just do whatever the fuck you want. Thankfully, there isn't a place inside his weary, overly reincarnated soul that wants to be a murderer or a sociopath.  No, his tendencies don't lean towards the macabre. While he can't tell you he's never killed anyone; he would certainly tell you to go fucking do the job yourself if you want it done. Eddie would rather be living his life via some hedonistic ritual he calls Perpetual Springbreak rather than a Kalifornia Crime spree.

In the Red Light District where the cracked pavements rise up to meet his trainers, he feels comfortable, recalling a certain brand of hell on Hellifyno. Sordid and sultry, mixed with a little piquant of hate festering on the breeze, the smoke streams from his nostrils gush around the back of his head. His hands are stuffed in his pockets and the hood of his black track suit is pulled down low giving him a silhouette of the epic cliche.

Occasionally he's propositioned in passing: No he doesn't want your needles, No he doesn't want your dirty snatch. In fact he has ​very​ specific tastes; none of which skid down as far as Skid Row. Suffice to say if he was really good and fucked up on a physical and mental sojourn; he'd wake up sticking to the floor of a flop house with his wallet missing and his belt looped around his neck. This has actually happened on more than one occasion - don't judge until you're willing to give it a go.  Lately with his time crunching closer to a closing, he has not been the same narcissist who only wants what they want. He really tried ( this time around ) to make a difference -- to change their cycle of wash, rinse, repeat.

He finds a bench in the middle of everything, preferring to be alone in a crowd rather than dangle in the obscurity of everyone else's drama. Sitting with one kick up on a knee and a smoke hanging from his hand over the seat-back he begins to ponder whether to fight, fuck something, or fucking leave it all behind.

Off on a tangent or a tirade he doesn't watch Angie storm down the hallway, leaving him holding his gut where her stabbing elbow caught him right in the solar-plexis.  Deliberately he begins to rub a hard pressed circle to light up the pain further and remind himself he fucking deserves it.

The walls of the one bedroom shit hole on Martin Luther King Boulevard begin to shake.

The heavy bone of his Cro Magnon forehead rests that thick skull of his hard against the wall in front of him where she once was.  He swears he can still feel the heat of her body in the phantom relief, continuing to conduct through his roving hands on the wallpaper. He stays there feeling the walls vibrate and rattle with her ongoing temper tantrum in their bathroom. Meanwhile, he is trying to check himself back to the room at the Hotel Sober with some deep cleansing breaths which do very little to clear his killer buzz.

Plaster dust falls from the ceiling into his hair.

His eyes close because he wants to thank whatever spirit guide saved him from fucking her to death right there in the kitchenette, but the truth is there is no one, not even a figment of his imagination, who would save the likes of him. Not only was he born into a life of eternal damnation, he just keeps perpetuating it by not letting her ​ascend to heaven​.

Eddie is still ( unfortunately ) drunk. The level of intoxication that makes you do really stupid shit and almost give in to the seduction you can just barely resist.  Saturninally he pushes off the wall and slumps over to the cabinet over the kitchen sink. From the very back of it he pulls a bottle of rum and uncorks with his teeth. It's Old, awesome, and it burns like a mother-fucker going down in two gullet choking swallows.

"Uuuuuwhhhaaa,​" emitting a base, guttural sound. Pining for the one thing you should never have. He pours her a half-glass putting it on the counter should she deign to present herself again.

A strip of wallpaper peels itself from the wall.

The rawness in his throat from the heavy breathing of unrepentant desire is similar to thousand shiv's scratching all the way down to his guts, just the way he likes it. The final big gulp fights all the way down until it passes his voice box and he can put sound to the quake of anger management continuing to resonate. That pain is secondary to the guilt making his blood like syrup. A well of alcohol and emotional high is exactly what the malediction from eating poisonous fruit picked from the tree of knowledge should feel like; because he has tasted the meat of that condemnation on more than one occasion ( loving her more than he loves himself ) and, that for a vainglorious bastard like Eddie that is really saying something -- even if he will never admit it.

A montage of flashbacks both very recent and from the past flicker in his mind. The older they get, the more they lack color and clarity, their haze making them somehow even more beautiful than they were when they were actually happening:

​Angie creeping into his room late at night and her cool limbs tangling around the blistering heat of this perdition.  Her face. Her supernal mouth parting around the tips of his fingers and the gentle blink of her eyelashes when he strokes their pads against her tongue. Her laugh, once buoyant and delightful becoming a hideous soundtrack to all the times he said No. The nights he lay awake with her sleep- sprawled across him, counting down the minutes until she woke up in time to sneak back into her own goddamned bed.

And of course, all the times he said Yes.

This would fry a less grounded man. Thankfully, Eddie has many ​improperly wired outlets to electrocute himself on.

Chairs from under the kitchen table shake, rattle, and roll over.

On that very subject, there is that unmistakable smell of ions and the whisper of her voice from the bathroom. "Say I love you, Eddie and this can all go away...," Angie solicits in a restored sweetness he doesn't readily trust.

A real smile happens under closed red hazed eyes and he licks the liquor and spit from his mouth slowly before whispering back, "I love you Eddie..."

If you're dying to see my friends click here.

Age is just a Number

Most importantly, Eddie is an asshole: a violent, vain, selfish, arrogant devil - I am not. Please understand the difference between OOC and IC. If you add, you start - Inbox please. Bring all your dirty laundry, I can hang it out to dry. - I'm not afraid of your whack storylines. The sign around his neck reads - Damsels in Distress, children, and homeless pets need not apply. I am over 18. You should be too. 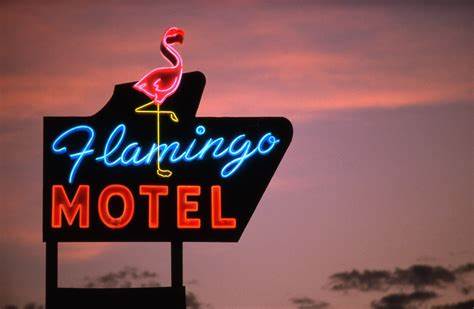 Somewhere between Heaven and Hell sits the Flamingo Motel. There is Us, and there is Them. We…
See More