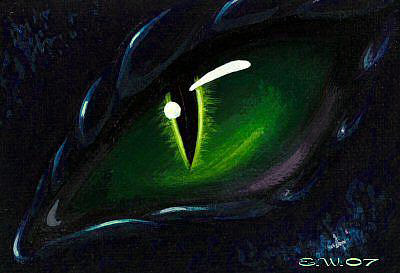 Tempest is a young Arctic Oceanic Drake from a dying breed that’s been poached into near extinction for their ability to manipulate water. Since being liberated from the New Zealand royal navy’s control, he’s been roaming the seas alone for several years in hopes of seeking out other dragonkin.

Like the rest of his kind, the big guy is a docile and gentle one most of the time, especially towards lessor mortal races. While slightly immature at times due to his current lack of age, he can be playful a majority of the time while friends may be present. Seeing him become hostile towards others is a rare scenario because of his passiveness.

Tempest possesses an advanced form of water manipulation, being able to create tsunamis, summon hurricanes at will, conjure up storms, whirlpools, or shoot beams of pressurized water at either an enemy or prey. His skills even allow him to influence the water molecules in a person’s blood to a degree. For fast travel across the seas, he can manipulate the surrounding water to propel himself at unimaginable speeds below or above the surface.

Another unique trait his kind carries. This includes being able to cool his surroundings, freeze a selection of water, create hardened ice spikes that can be turned into projectiles, and cause a devastating hailstorm by freezing a small portion of the heavens. A common defense move used by him is creating thick ice walls. 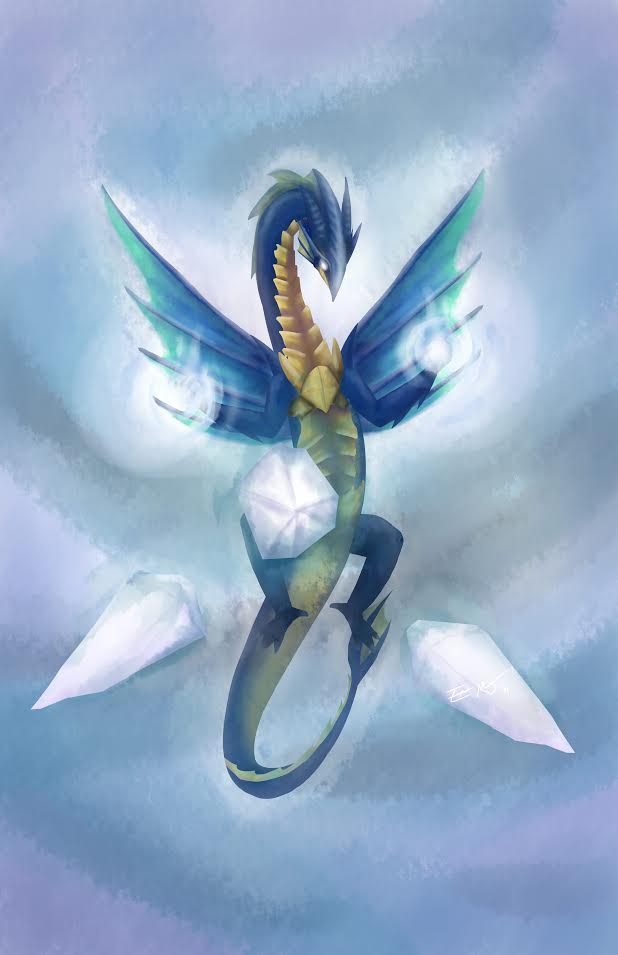 Weather Manipulation - Like the rest of his kin, he can conjure up devastating storms and hurricanes. This allows him to flood entire towns and cities if given enough time. While weather control can be one of his most powerful abilities, it often burns out most of his magic depending on the scale it’s being done on.

Lightning Redirection - Exactly what it sounds like. Knowing basic Atomkinesis has enabled him to draw electrons from the atmosphere until they can be charged enough to create a brief bolt and be projected where he wishes. If not done correctly, Tempest can risk frying himself in the process or anyone around him. This rare attack move doesn’t change the fact he’s vulnerable to electricity naturally. This can only be used if a severe thunderstorm is present.Weapons:Poseidon’s Trident - A legendary item given to him by the God of the seas himself. This allows Tempest to use more special forms of water manipulation and can be used as a melee weapon while in human form. In addition, the Trident can break any Ocean bound curse or be used to alter the sea level.

Tempest is roughly ninety-one feet in length from head to tail. Reflective azure scales cover most of his hulking form, with a golden underbelly and varying turquoise flippers. Three horns can be found bent back across his head almost like a trident, along with emerald serpentine irises, and webbed ears. While he lacks a pair of wings, two large fins remain on his back to keep him level in water. Gold spinal fins run down along his armored back and stop near the end of the tail. 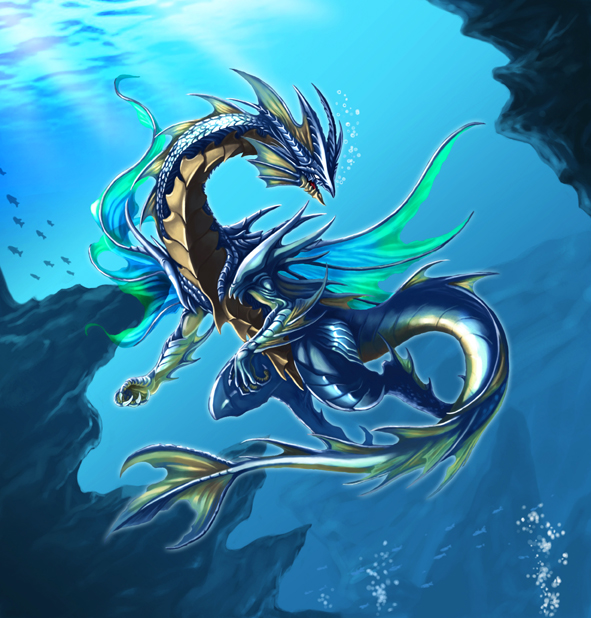 Now you may be wondering: Why do so few of his kind exist anymore?

Long ago sea drake populations used to range in the hundreds per pod, arguably one of the ultimate apex predators with the exception of Leviathan. There were many different variations of them, from their unholy deep-sea cousins to freshwater species, tropic breeds, and many others throughout the globe. While their winged counterparts inland were being wiped out, their numbers in the wild remained unchanged for some time.

With the industrial age came the ultimate decline. As mankind's technology became more advanced, so did their weapons, and that enabled them to finally combat the aquatic dragons effectively despite their docile temperament. But this was not the root cause for their elimination: Pollution of the seas claimed more of their lives than humanity's crusade over could. As a direct result, most became biologically vulnerable and died of illness. All that contamination wiped out many of their pods. Tempest is one of the few survivors of this.

Prior to being forcibly separated from his mother, the juvenile of a drake was captured and had undergone training to serve the Navy for a new program they created. Though defiant at first, they managed to tame him when a woman named Diadena Hernandez was assigned to him as his handler. She succeeded in getting him to corporate and went on a number of missions with her Draconic partner. The two became emotionally attached after a period of time.

Once the news had spread of a decision to dissect him came about, Diadena removed his tracker and turned him loose. From there, he fled from the Naval base before migrating hundreds of miles away.

It was only later until the young Dovah heard a song coming from the shoreline. Something about that melody had drawn him towards it in ways that could not be described, other than an uncontrollable urge to confront it and be with whoever was singing it. The one responsible was what appeared to be a young brunette woman, who was too shocked to flee at the sight of him. In his seemingly delusional state, Tempest showered her with affection in the form of licks, nuzzles, and even attempting to hold her. As if knowing he'd be in danger just for staying out there in the open, she chose to travel and run off with him.

Whether his love for her became willing or was a long-term side effect of her sings, the two became an inseparable pair who got in and out of trouble together.

He was a Sea Dragon, she was a Siren, and neither one had a place to call home.

Together they became an unlikely duo, like two fugitives who had no one but each other to rely on.

As they carried on together, the two became increasingly frustrated with the size difference between them, it almost became a sort of barrier. To compensate for this, he drained the Siren's blood and replaced it with his own, which held some magical properties that could convert another into one of his kind. As a result, Clarion instead became a sea serpent. It was through him that she learned how to hunt prey with her new lifestyle. Them migrating together became a daily routine.

But those days were limited.

Sometime prior to meeting a man who forged an adopted family of monsters, something terrible happened that forced their group to disband. In the midst of all that chaos, Tempest and his mate Clarion were unable to locate each other quickly enough and fled separately. Just like last time, he was required to travel alone for a second time.

Hopefully for the last.

As for his whereabouts, Tempest is currently on an endless migration, whether it be in search of Clarion, the family, or to seek something else. With no one left to turn to, he conceals himself from any boats or ships that would draw attention to himself. He'll frequently roam in shallow waters, and is known to occasionally take on human form to explore any populated coasts thanks to a special transformation powder.

A gathering of Beasts (For Jorah and Arch)

Started by Tempest in Roleplay (In Character)

Searching for others to write with!

"Even after they were nice and secure on the brute’s back, there was still a great sense of tension,…"

"No matter how many ice shards he nailed it with, that monstrosity was dead set on getting Spencer,…" 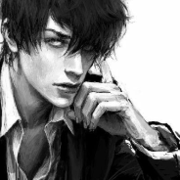 "
Storms were nothing new, he lived through more of those than he knew how to count. Strangely…"

"In the midst of trying to spot their foe again, it didn’t take long for the lesser sea drake to…" 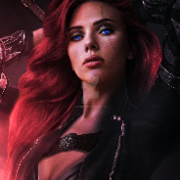 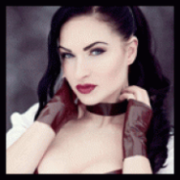 ""One of the Empire's finest warriors I see."" "Ripples would appear at the water's surface, followed by a shift in current towards her direction.…"

"// Welcome to the site! Don't hesitate to ask if you have any questions. (:"

"It was at that moment when he realized that the weight of his friend couldn’t be felt anymore, and…"

"It was at that moment when the younger reptilian decided to examine the beast’s remains up close,…"
More…
Loading ...